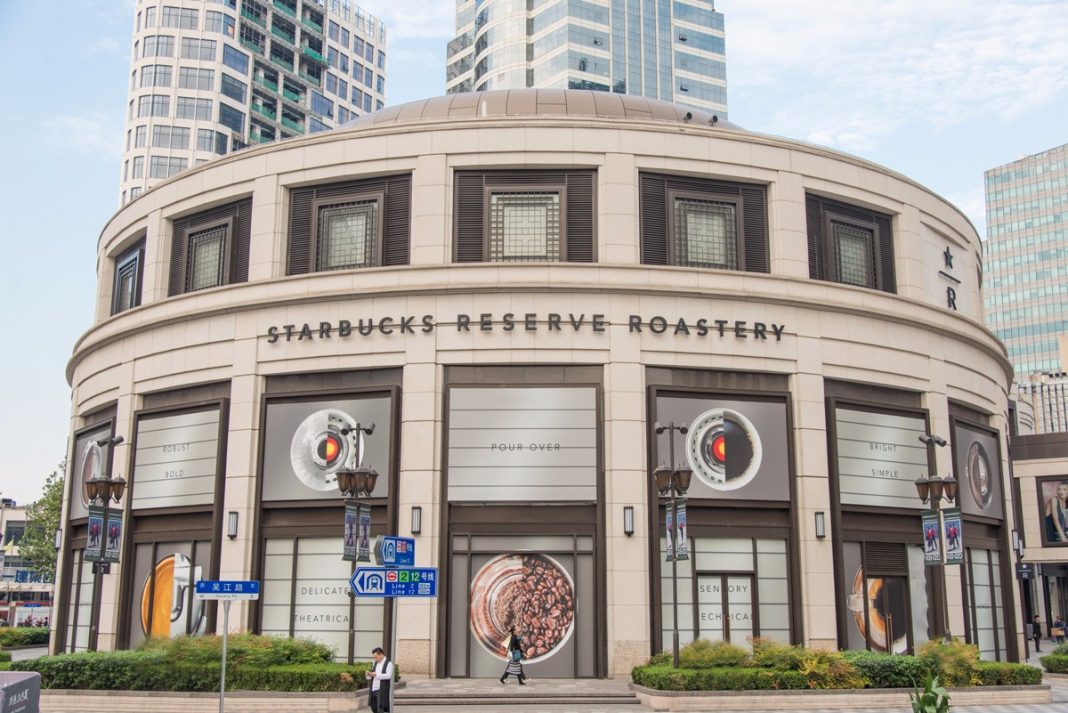 Shanghai is an amazing and dynamic city, so it’s no surprise that the World’s BIGGEST Starbucks recently opened here. In December, 2017 – to much fanfare – Starbucks opened its first Reserve Roastery outside of the US, and now in May, 2018  we visited! 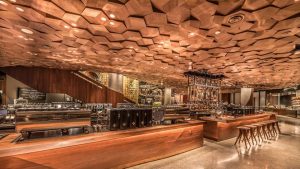 We’d heard the buzz and seen the very long lines and wanted to wait a while to let the madness subside. I know some people are Starbucks haters, but I do love it, in fact last week I was in an early morning meeting and I (the American) had a Starbucks cup, my British colleague had a Costa cup (UK Brand), and my Chinese colleague had a Chinese coffee brand. We all had a good laugh at our respective coffee choice, but what is perhaps most telling is how much the Chinese have taken to coffee shops. They are obsessed with coffee (& tea) shops, from little independent shops to gargantuan Starbucks.

The fight against Jet Lag

We hadn’t initially planned a coffee trip, but my mother was in town so we took her out for a Cantonese dim sum lunch in a mall (it’s a Shanghai thing) and then we realized that we were close to the Starbucks Reserve. It was a bit drizzly so the crowds weren’t too crazy and we needed to keep her up to help fight against the jet lag – so the world’s largest Starbucks seemed like a great fit for an afternoon adventure.

After about 20 minutes in line, we were in! I was immediately impressed (& I didn’t expect to be) as you can tell that a lot of thought went into the design.  They also did a great job controlling the number of people inside – this may not seem like a big deal, but China has a lot of people, and a lot of them love coffee, so while definitely not empty, the place was manageable (even with our bigger stroller) and really helped to make the experience a good one. 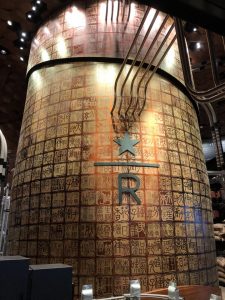 Our first matter of business was to make a loop of the first floor to check out the goods. It’s a really beautiful design and flow never felt super crowded and the layout just seemed to work – so kudos to Starbucks. My favorite aspects were the traditional Chinese characters on the big roastery bin (I’m sure there is an official name somewhere) and the “SHANGHAI” sign made out of coffee bean bags.  I also think Roman Mars of 99% Invisible should totally do an episode on the design of this space, because someone had to have done a lot of thinking about it.

The first floor has tons of merchandise, a huge bakery, a very large coffee and dessert section, a viewing section for watching the roasting action, and then a savory/beer/chocolate section.  The main draw is the roastery and watching the beans get moved around and put into the roaster and spun around. They have a really nice viewing railing where you can park yourself, your coffee and your treat and watch the whole roasting process.

Not Just Coffee; Something for Everyone!

After we made our loop, we decided to go for a beer and convinced my mom to get a chocolate. We ordered an IPA and a lighter one that I cannot recall. Plus, they had a pretty solid selection of Neuhaus chocolates (which became our favorites during our recent trip to Belgium) so It was impossible to go wrong with any choice. 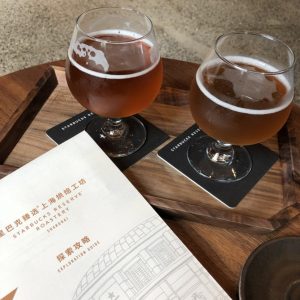 Grammy & Sam were on baby watch so I went off to purchase the goods. It was super easy as they have “floating’ staff to take your order and expedite it. An English speaking employee helped me place my order and then handed me off to another guy to process payment (since mobile pay is essential here, this system really works well bc no one is using credit cards or cash). Payment processed, my two beers + 1 chocolate were ready in just 2 minutes. Not bad at all.

The friendly staff had helped Sam find an open spot so we had super comfy stools and a cute table in the corner to take in all the action & observe SO MANY selfies. We then each took turns visiting the upstairs area which was cool but not as cool as the first floor. They had a large Teavanna section with some really beautiful teas as well as another coffee + sweets area, but what was most fun was watching so many families out an about on a Sunday with all kinds of goodies to make the most of a rainy day. 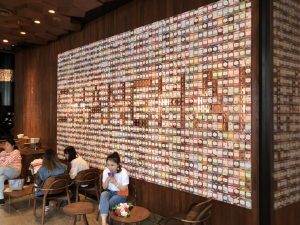