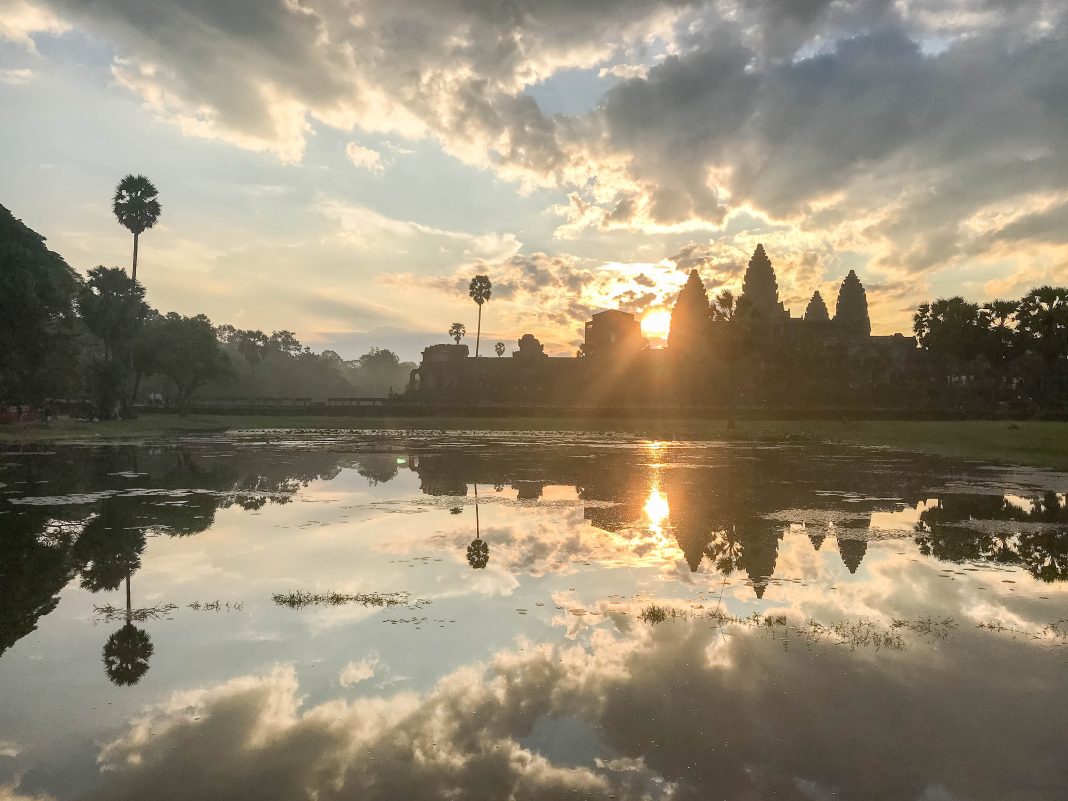 We spent a two magical days in the shadows of the ancient city of Angkor Wat on our way to Thailand for the Chinese Golden Week. Never have we been more excited to find both a cheaper flight and a chance to go back to one of our favorite destinations in the world. While definitely a different experience with a toddler in tow, our laid back approach made it the perfect balance of exhaustion and relaxation. (Don’t miss the quick video at the end of the post for the highlights!) 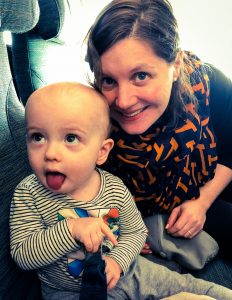 We snagged a great flight deal from Shanghai but it meant a SUPER early departure from Shanghai and a quick stopover in Hong Kong. However, we made the most of our short layover with a stop into the Cathay Lounge  – enjoying the perks of our American Aadvantage status before it expires in a few short months. Fueled up with some breakfast and a morning Mimosa from the lounge we headed to our 2nd short flight from HK to Siem Reap. The biggest change on this trip was that it was the first time that we purchased Charlie his own seat; with a very active toddler, we decided it was worth the expense and it made the trip much easier as we could occupy a whole row of three seats and keep the activity limited to our space. We landed in Siem Reap on time and were able to secure our Visas on arrival for about $30 USD – a nice change from the super expensive Chinese visas. We had arranged a driver through our hotel and after clearing customs and immigration, we easily found our driver and we were off! 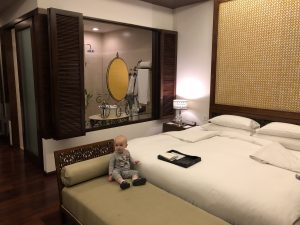 Located just 10 minutes from the airport and about 15 minutes from Angkor Wat, this small boutique hotel was not only a wonderful place to stay but also super convenient for our short time in Siem Reap. We had never stayed at an Anatara property but we had walked through one on our last visit to Phukhet as it was adjacent to our hotel and it looked great. In Siem Reap, the rooms were spacious and beautiful and most looked over the salt water pool. The hotel had some really nice perks like gratis Cambodian scarves for temple visits, welcome snacks, free daily refills of the minibar and a complimentary cocktail hour each evening with rotating drink options and a fantastic restaurant. However, the highlight was the friendliness of the staff and the attention they paid to Charlie. He delighted in their attention and it was clear that fun was had by all. 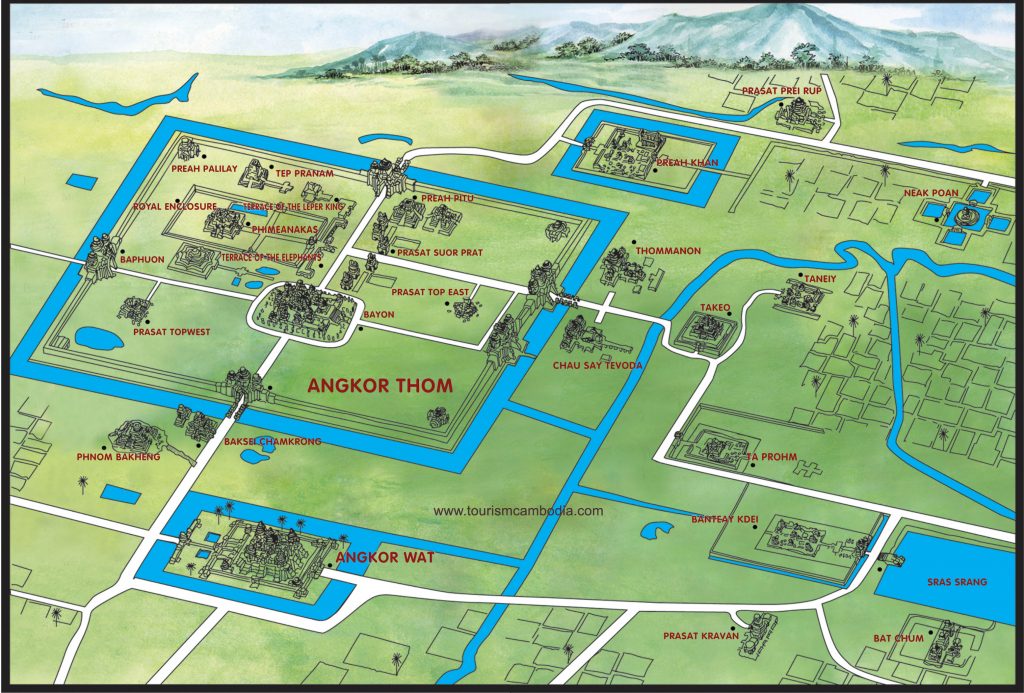 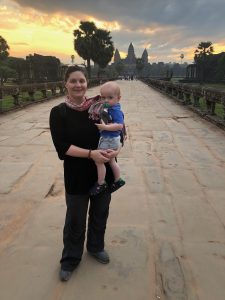 Since we had limited time in Cambodia we made the most of it by deciding to see the sunrise over the temples; something we had not done when we each individually visited Angkor Wat in our early 20s! We booked a driver through TripAdvisor and had a 4:30 AM  departure time as we needed to purchase our multi-day entrance tickets  first. We were slightly delayed due to a minor fender bender as our driver backed up to depart the ticket office – I was thankful for car seats and that it didn’t take too long to resolve before being driven to the best spot for the sunrise.

We followed the early AM crowd and found a good spot to watch the morning light cascade upon the ruins. It was a truly magical beginning to the day – definitely worth the 4 AM wake up call and something we will never forget. After a magical hour, we finally relented to the many calls from vendors for breakfast and had a strong morning coffee with condensed milk to fuel the morning. 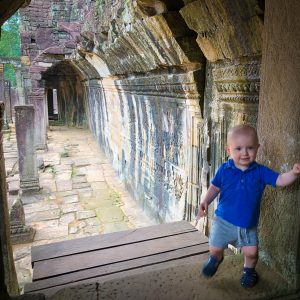 We then spent some time exploring Angkor Wat temple; wandering throughout the grounds and imaging what life would have been like for the ancient Khmer people. One thing to remember is that the entire park is massive and you can spend days upon days and still discover new spaces. Two things stood out to us since our last respective trips to Cambodia 1) a LOT more tourists, and 2) improvements made to protect the ruins. In my first visit, I remember being one of a few tourists and a much quieter atmosphere and you could climb up on almost any structure. Today they have added stairs to protect the original ones as well as added more accessible walking areas. After an hour or so of exploring we made it back to our driver and headed to our next destination. 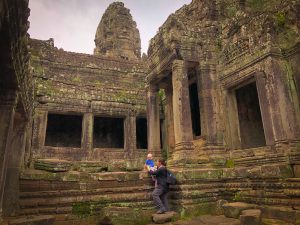 The Cambodian Tourism provides some really great background and history of the entire complex  –  Prasat Bayon was built in late 12th century to early 13th century about 100 years after Angkor Wat by the King Jayavarman VII &  dedicated to Buddhism. The area is full of large smiling faces carved into the temple and was a complete joy to explore. It seemed as if each corner held a new surprise and the enormity of the complex really began to take hold over us. Even though it was an early October morning, it was still quite warm and we did our best to take it slow and be mindful of Charlie. I do think that while traveling with a child can be hard, by forcing you to slow down and walk at Toddler pace, you get to see some things that I would have previously just blown past. 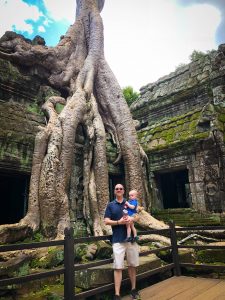 Ta Keo is the Tower of Glass is a simpler structure and really a joy to visit – it was quite crowded and our visit while nice was relatively short. We then ventured over to Ta Prohm – which is the iconic trees growing into the temples that many people think of when the consider the Angkor Complex. It’s a huge area and we only covered part of it. We then headed back for a short lunch break and then while the ladies were off enjoying spa treatments, the boy decided to explore a few more areas via Tuk Tuk such as the Terrace of Elephants which gave Charlie a chance to run and play a bit too. 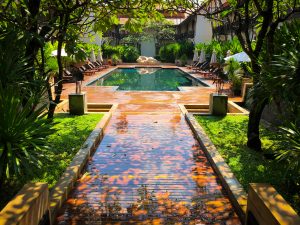 Most people visiting Angkor Wat probably don’t carve out spa time; but as I was celebrating my birthday I decided to indulge a bit and opted for the two-day spa experience which included 4 treatments over two days. After a rose petal foot bath, I had a cucumber body scrub + massage on Day 1 and a facial and massage on Day 2 – each day ending with a small cup of tea.  It was indulgent and totally worth it. I had the same attendant on both days and it was a great way for this mama to get some “alone time” while also being pampered. A perfect birthday treat! Sam’s aunt also had a massage and reported back that it was “divine”.

Upon the recommendation of our drive and looking for a bit of a less crowded experience we decided to venture out a bit out of town to Kbal Spean about 50 kilometers northeast of Siem Reap to go on a hike to see a waterfall. It was interesting to see more of Cambodia on the drive and after a hour or so drive we made it to the base of our destination. Little did we know that the short 1.5km hike was basically all uphill; the day was warming up so we set off and Sam’s aunt made it about half-way before deciding she was happy to enjoy the sites and sounds of a great little halfway spot while we finished up the hike. We finally made it to the top and while we did water technically flowing over rocks, I would not have described it as a “waterfall” – it was more water running over Khmer ruins. While beautiful it was also a little comical because the reality vs what we had imagined were a little different. Sam was a trooper lugging our 24 pound kiddo upand down the mountain and while it felt good to get our legs moving, we don’t recommend this destination unless you have lots of time to kill and want to climb. Here’s all you really need to see: 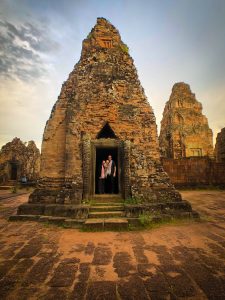 Since we had experienced sunrise, we also knew we wanted to experience sunset. Sam did some great research and found that PreRub was a great place as it was a smaller site and thus less popular and had some unique features that meant the light would fall beautifully around the ruins. The steps to the top were very steep and we made it with Charlie in tow but Sam’s aunt decided to stay at the bottom. The views were incredible and we saw some 20 somethings taking some daring photos from high up places, and then we slowly made our way back down to the base to explore the grounds. With almost all visitors on top of the structure, it made for an almost private park experience and Charlie loved exploring so freely. It was truly beautiful and we highly recommend this “less popular” site. 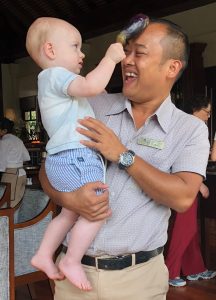 In addition to the all of the amazing temple, what also really stood out was the restaurant at the Anatara. Before having a baby we would have been out on the streets of Siem Reap finding street food or the most highly recommended local spot. However, when visiting developing nations with a child under 2 we find ourselves staying a bit closer to our hotel rooms for meals as it is just easier and removes most of the food/water risk. Chi restaurant became our default for both breakfast and dinner each day. The breakfast buffet options were wonderful and the evening meals were really delicious with both Khmer & western options. The staff also loved Charlie and entertained him so we could enjoy our meals a bit more. They were also really kind and flexible as well. On my actual birthday, Sam had an evening conference call so he couldn’t join us until much later that night. The hotel made my dinner super special and even had a birthday dessert made for me! 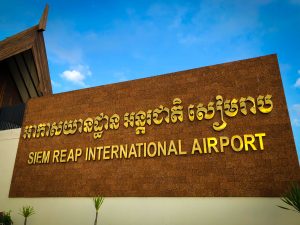 After 2.5 very full days in Cambodia we were off to the most relaxing part of our Golden Week holiday. I was shocked to see that the Siem Reap airport has a Starbucks (they are not literally everywhere) but we were happy for coffee and that an early morning departure meant that we were able to arrive in Thailand by noon to meet up more of Sam’s family for the balance of our holiday. 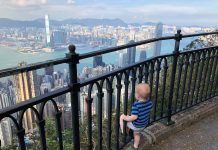 Lauren - March 1, 2017
0
Looking for a Zika-free get-away at 24 weeks pregnant that was not too far from Shanghai, Seoul was the perfect destination. It offered history,...