Okay so when I first heard that Sanya was considered China’s Hawaii I wasn’t sure if this was a joke or what. While Sanya is no Hawaii, if the meaning is that this is where you will find the best beaches and resorts in China then China’s Hawaii it is. Not sure that is saying so much, but we were actually quite surprised at how good of a time we had and all things considered would even consider going back when we need to escape Shanghai. We had initially planned it as a dual-family get-away as one of my former Target colleagues now works for Nike China and we thought that it would be a fun dual family get-away and we could trade off babysitting! Unfortunately, a work trip to the US came up for him, so it was just our little trio for the beach adventure.

If you are like me, I had never heard of Sanya and definitely couldn’t point it out on a map. But it kept popping up in my WeChat Mom groups as a good domestic tropical get-away and two different sets of friends had recently visited and said it was great. It’s an island province called Hainan and is southeast of Hanoi, Vietnam. 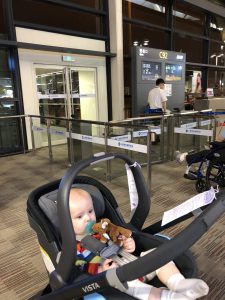 To make the most of our the holiday weekend we decided on a Friday night flight, ensuring that we had two full days and then a mid-day Monday return.  Thankfully, we are finally learning how to pack lighter for trips and knowing that we would pretty much stay at the resort we kept it light and packed beach & casual clothes only. While most of our air travel is international we gave ourselves plenty of time to get to Pudong in case the domestic terminal was crazy busy. Thankfully, it wasn’t wildly crowded and getting through security was a breeze since China is great about having dedicated Family Lines for security. 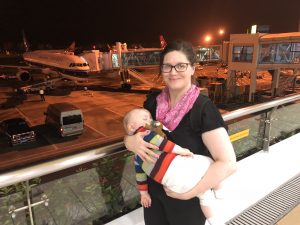 Thankfully Charlie slept through most of the 3.5 hour Air China flight and when we arrived at 10:30 PM, he was still totally asleep. It was the first time that we had flown and gate-checked our new Uppa Baby stroller + car sear combo  base since our disastrous KLM experience (still no response!) so we nervously waited at baggage claim were so happy to see our stroller safe and sound! Air China 1: KLM 0.   Since we had a late arrival, Sam had pre-booked a car with the help of the Marriott concierge, so after picking up our bags, we easily found our driver. 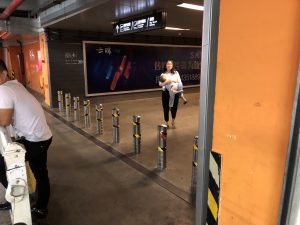 The only challenge was that the airport garage had guard rails to prevent travelers from taking the luggage trolleys from the terminal…but this also meant that our stroller wouldn’t make it through the barricades, but with some heavy lifting we made it through the obstacle course and were on our way.

We’ve long been fans of Marriott properties, but it seems that since moving to China, we’ve become de-facto Marriott loyalists as they are always solid options, with some being better than others. We chose the Yalong Bay Marriott from a recommendation of some Shanghai-based American friends and it did not disappoint. It has a beautiful open-air lobby and upon check-in we were presented with some fun tropical necklaces. I wasn’t quite clear of the purpose, but at 11 PM it just seemed like a fun welcome gift. 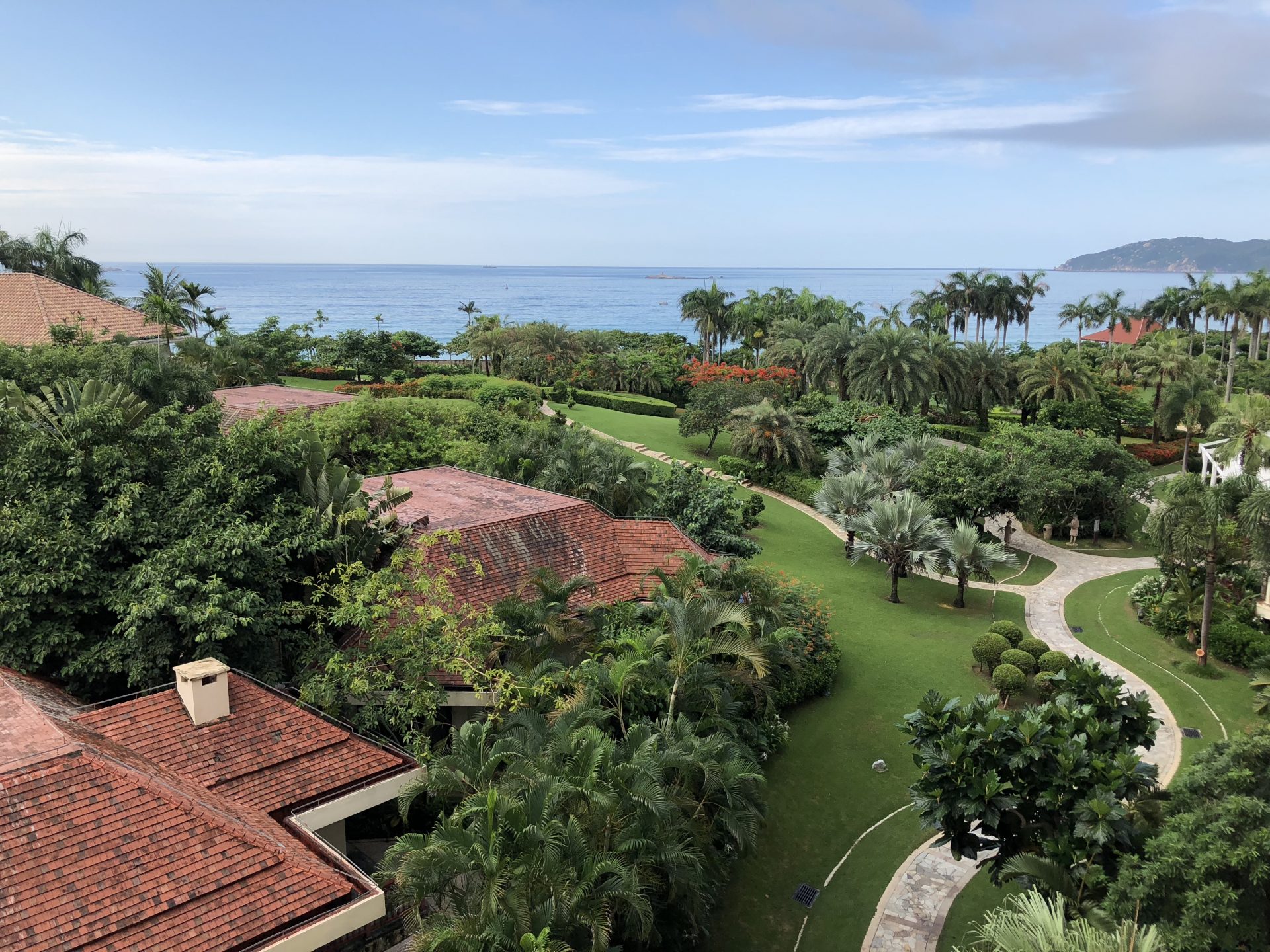 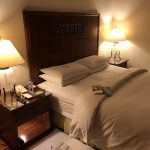 Sam booked us a room with a king-sized bed and an Ocean view – we’ve since learned that as we spend more time in our hotel rooms (I’m looking at you nap time!) it’s worth it to pay for a view that we can enjoy while Charlie sleeps. We had a big bathtub, shower, and all the usual amenities, so we were all set. The room didn’t smell of cigarette smoke which is a win for domestic travel in China and the staff did a great job every day.

Sam had booked a deal that included breakfast and each morning we joined the throngs of families to explore and enjoy the breakfast buffet. They had a fair amount of western breakfast options (muesli, cheese, breads/pastries, yogurts, omelette station) as well as a pretty fabulous Chinese buffet with loads of baozi, fried rice, veggies, tropical fruits, fish, etc – the works! We typically ate more than we should have and really never did much in the way of lunch since our room rate also included an afternoon tea set.  Each afternoon before the rains came, we would sit in the main lobby and enjoy our tea set of fruit, and various sweets – more than enough to make it to dinner. 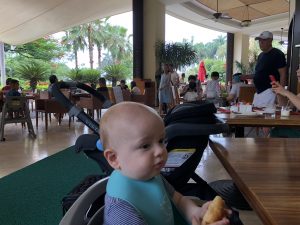 We knew we would stay on the resort so we also indulged in the dinner buffet which had tons of seafood, vegetable, meat and noodle options as well as a pretty great dessert set up  (& the same delicious rum raisin ice cream as the Marriott in Phuket!) and free flow wine or beer. We made dinner a leisurely activity because each night they had talented Filipino cover band. And of course I texted my sister (a huge Bruno Mars fan) and basically told her that Bruno Mars & his band were playing a gig at the Yalong Bay Marriott. Charlie and a few other kids also loved the music so we had a kid-friendly dance party too. 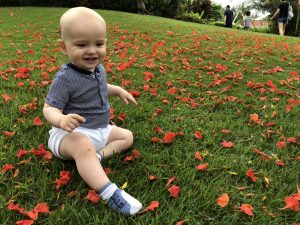 One of our favorite aspects of the resort was just how well maintained the landscape was and that around every bend of the pathway was another picturesque scene. My favorite was a tree that was just in the process of dropping its colorful blooms where Charlie could play in the grass amongst the petals. It was a beautiful location that allowed for all kinds great photos with our little guy.  We loved how many flowers, plants and the degree of thought and planning that had clearly gone into the landscaping. What I think they understood at this property more so than the adjacent more expensive ones like the Ritz-Carleton was that since the beaches were so crowded and the undertow sufficient to discourage swimming that the majority of the guests would rather relax in hammocks or by the pools so they designed accordingly. 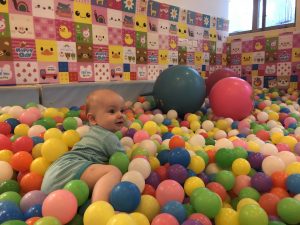 While the landscaping was one of our favorites, what we never would have guessed would be our absolute favorite was the Kids Club! Prior to arriving at this Marriott I had never even heard of such a thing. Then had the first rain the first afternoon not coincided with my needing to firefight some rating and review issues with a new product I had just launched, Sam wouldn’t have been forced out of the room with Charlie to go explore the covered sections of the property. he saw a sign for a Kids Club and the rest was history… in that we spent at least a couple hours there each of the next couple days. It was awesome both indoors and out with a ball pit, slides into the ball pit, a padded trampoline room and padded floors perfect for a quasi walker like Charlie. The outside pool had a slide the perfect height for him to be helped up and then slide down.  The depth of the pool was exactly right so that he could walk/float with a small inflatable tube to make sure he stayed upright in the event of a slip. The only downside was that they charged 40 RMB (~$6 USD) per hour of floaty usage and were quite intense aboutit;  now we are newbies to Kids’ Clubs so maybe this is standard but it did feel like a little bit of nickle and diming to use a floaty at the kids pool – just like beach towels, I wish Marriott would offer gratis floaties in the kids pool. 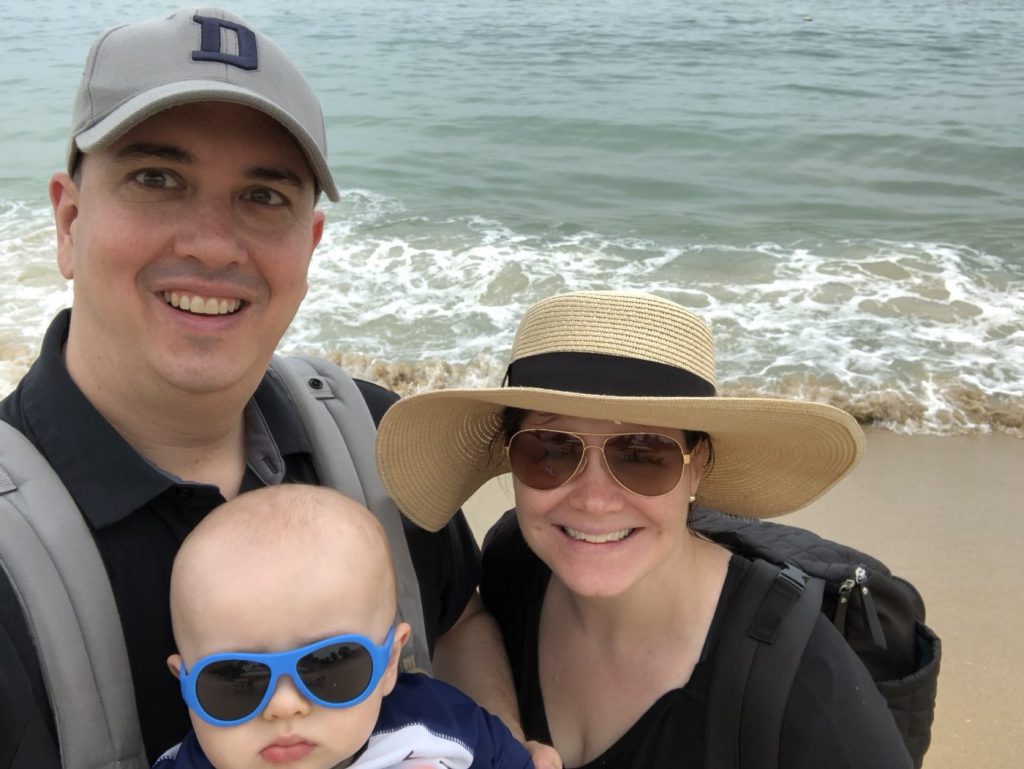 While the beach was okay, because it was quite full most of the time due to the short window of time before the afternoon rains and after breakfast, we opted to hangout at the pool most of the time. Our general routine became going to the beach briefly, then going to the Kids Club and then the bigger pools until the rain rolled in. There wasn’t great service at the pools but they were nice and had good views of the ocean with plenty of large palm trees nearby if you wanted to get out of the sun. However, what we discovered our last night there that we wish we’d known as of day one was that the pools stayed open well past dark and were lit up quite beautifully. We had dinner right when the buffet opened so we finished pretty quickly and decided to try to get a final dip in the pool only to discover that we had the whole pool to ourselves since everyone else was still gorging themselves on the buffet dinner. It was so relaxing and Charlie was absolutely mesmerized by the pool lights and the lack of our constant concern about him pulling his hat off and getting sunburned. The funniest part was that there was a wall of floats at one end of the pool so we thought we would help ourselves to one and then a girl popped up from behind the float rental counter and then a guy right afterward… at which point we apologized and swam off. 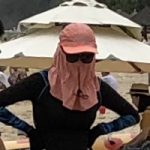 We had heard that the Ritz-Carleton was just down the beach so one day we walked down to check it out for future reference. On the way we captured our first proper facekini sighting and got this picture to help you understand what this means. Essentially the concern with skin damage from the sun and premature aging has led some to cover their full faces with swimsuit material to protect their skin. After surreptitiously capturing this picture, we continued on to the Ritz and found the beach there to be actually less accommodating and quite challenging to walk up to the properties. So much so they had installed ropes for you to hoist yourself up with along with ropes to serve as steps along the way up the beach embankment. 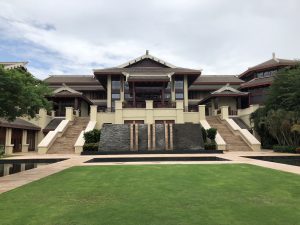 Once up off the beach there were some beautiful umbrella covered beach chairs and then a long walkway up to the pools and spralling lawns up to the main accommodations. Unfortunately it all felt too wide open and not at all welcoming. The main buildings were beautiful and there were some gorgeous pools that flowed alongside the first floor that would have afforded a nice degree of privacy. But while it was nicer, it didn’t have the warmth of the Marriott so we headed back promptly to the kids club!

When we booked our 3-day domestic get-away, we had no idea how much we would enjoy the Sanya Yalong Bay Marriott Resort. It was the perfect mix of kid-friendly activities and parent R&R. We enjoyed it so much – even more than our trip to Okinawa- and plan to return sometime within the next year.  9/10 Highly Recommend (10/10 if they didn’t charge for floaties!)

Lauren - June 26, 2018
0
We couldn't think of a better way to celebrate our little Charlie's first birthday than with an all-day excursion to the Shanghai Disneyland to...