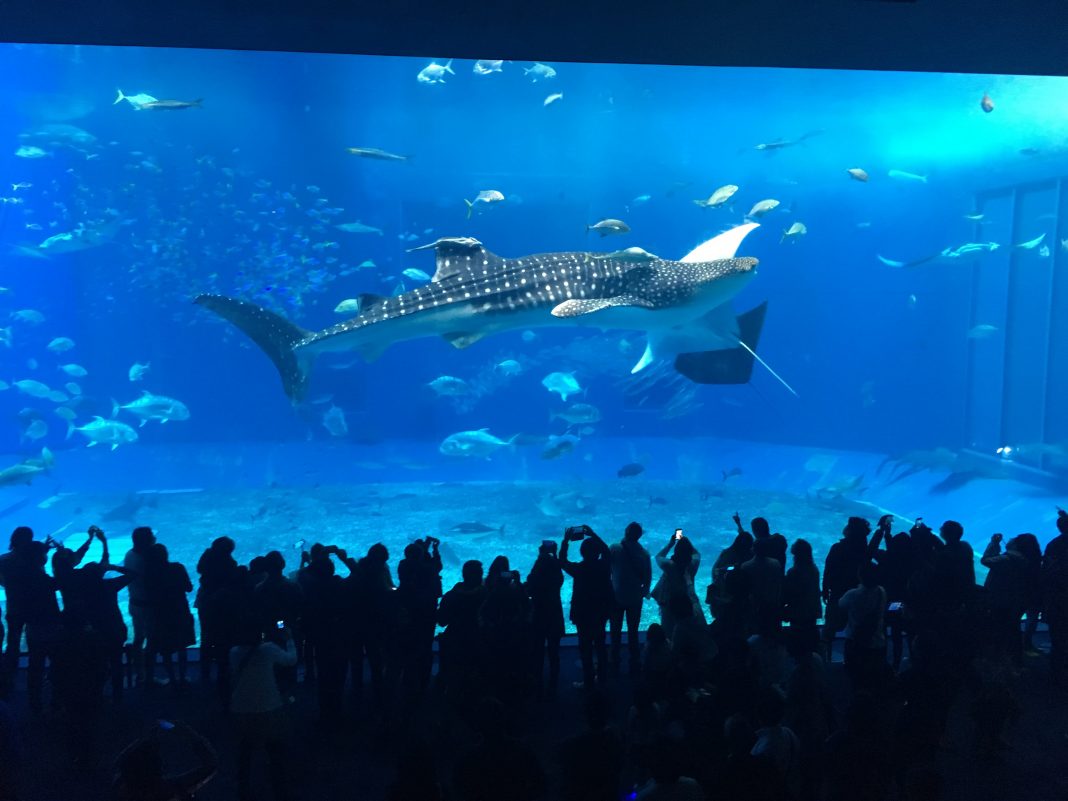 Looking to get away for a long weekend, we took a spontaneous trip to Okinawa for clean air and beaches! While we had a bit of a hassle getting around, it was a fun trip for Lauren and me but more importantly little Charlie had a ball! 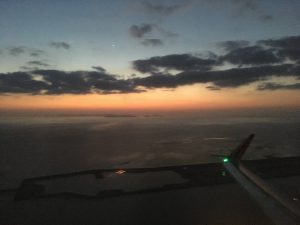 Since we have narrowed our list of weekend or short trip destinations to those with a direct flight from Shanghai, getting to Okinawa was pretty easy. We love how family friendly the Pudong airport is if you have little kids in that you can skip the long immigration exit lines. So we took a late Friday night flight to Okinawa and arrived shortly after 10pm. Unfortunately, we didn’t quite realize just how far away the Marriott Renaissance was from the airport. It didn’t help that our taxi driver avoided the toll road and had us stuck in traffic for longer than needed. On the plus side we were able to enjoy seeing the various stores and neon light signs along the way while Charlie luckily slept peacefully the whole hour long plus ride. 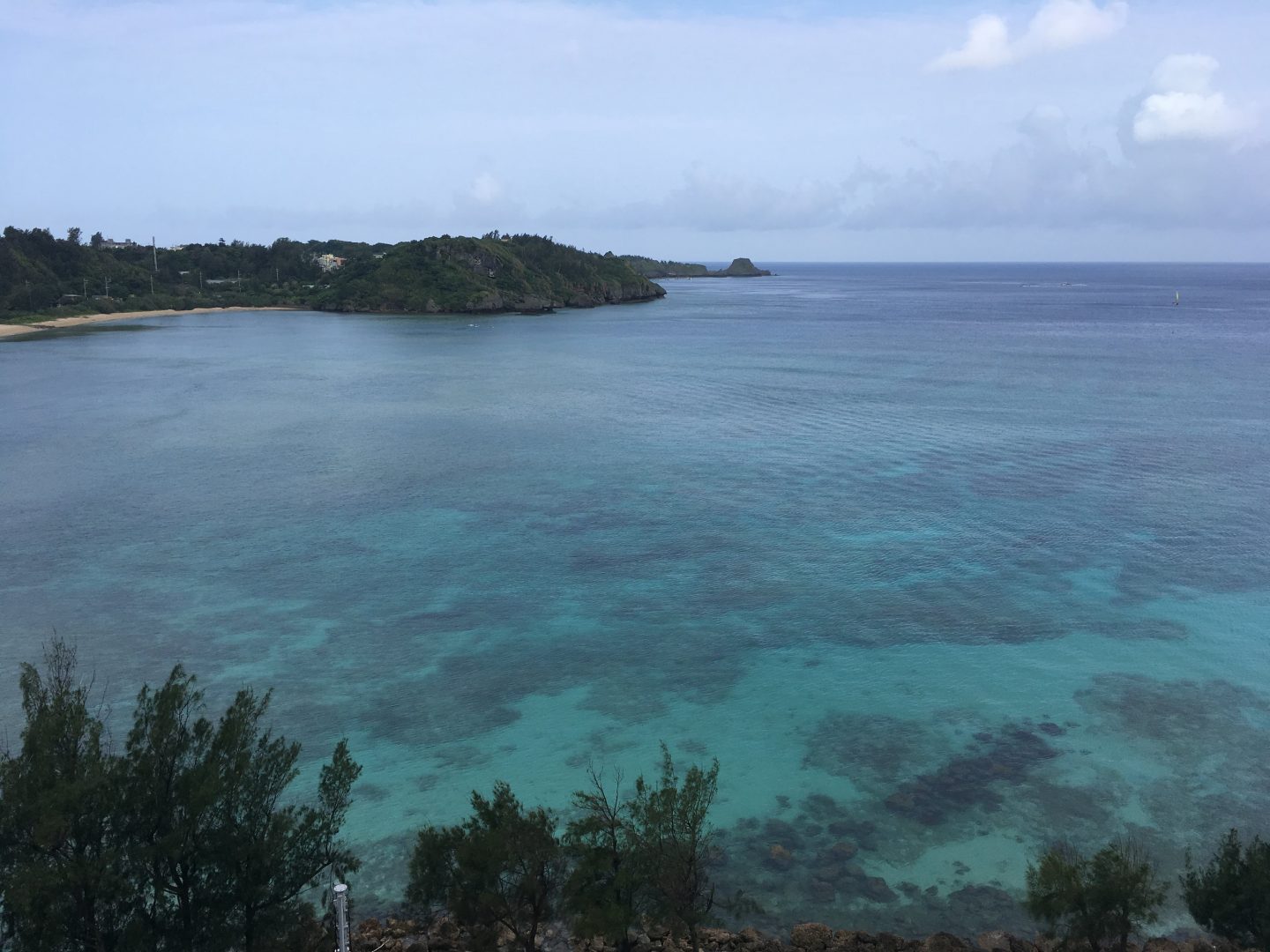 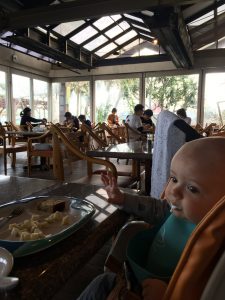 So if you’ve read any of our other posts, you’ve probable seen that we tend to gravitate to Marriott properties. Of course the loyalty program helps, but we’ve found they have a good selection of options around Asia and we haven’t had a bad experience yet. This Marriott Renaissance didn’t disappoint either. Although it was a bit on the older side, the room was a decent size, comfortable and had a wonderful view of the green-blue waters off the coast. We loved the breakfast buffet because… well… who doesn’t love a breakfast buffet. Seriously though, they had a mini buffet down at kids level that we thought was super cute. Plus they had a fresh self-squeeze orange or grapefruit juice station that we couldn’t get enough of. 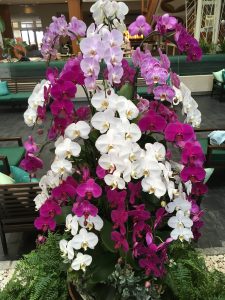 The property was decked out in orchids all over the place, which was welcome color as the rest of the building was a little drab. We made sure to get to breakfast early because the coffee in the room was pretty bad. Not like any hotel coffee is good but this one was instant… so yeah, breakfast coffee to the rescue. The one really awesome thing that we loved about this Marriott was that they had free laundry machines with free detergent on each floor! It was so great to be able to come back from the beach with sand in all our cloths and just throw them in the wash. Not to mention one less task to do upon our return home. The property also had a pretty well-stocked Suntory with snacks, beverages, toiletries (swim diapers!), and little gifts. Japan is great about celebrating regional cuisine and the Suntory was stocked with all kinds of Okinawa delights as well as some unique Kit Kat flavors so we tried both the yam and melon varieties and picked up some Okinawa stocking stuffers for Christmas. 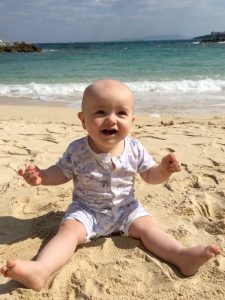 This was the first time that Charlie had been to a beach where he could really sit up and play in an engaged way so it was tons of fun to sit in the sand with him and throw a little mini plastic beach ball back and forth! The hotel had lots of chairs set up with big beach umbrellas which was great for baby sun-safety and my sun-averse wife. The water was a little chilly but it was a nice view for playing in the sand. 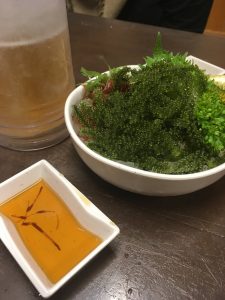 Since Lauren had lived in Japan for a few years she was keen to get out of the resort for dinner to get some truly local cuisine. One of the downsides of the resort is that it was pretty far away from most everything (except for the beach). We hadn’t rented a car so only a few places were within walking distance. For both nights we walked to a small local restaurant (Kaisen Hamanoya) that had a relaxed family beach vibe. We we filled our bellies with sashimi on night one and grilled lobster with sauce on night two (since we had seen everyone ordering it the night before). One of the culinary highlights was trying and enjoying Sea Grapes (umi-budō (海ぶどう)) a very cool shaped algae. Our briny sea grapes were served with a side of vinegar paired perfectly with some Orion draft beers. 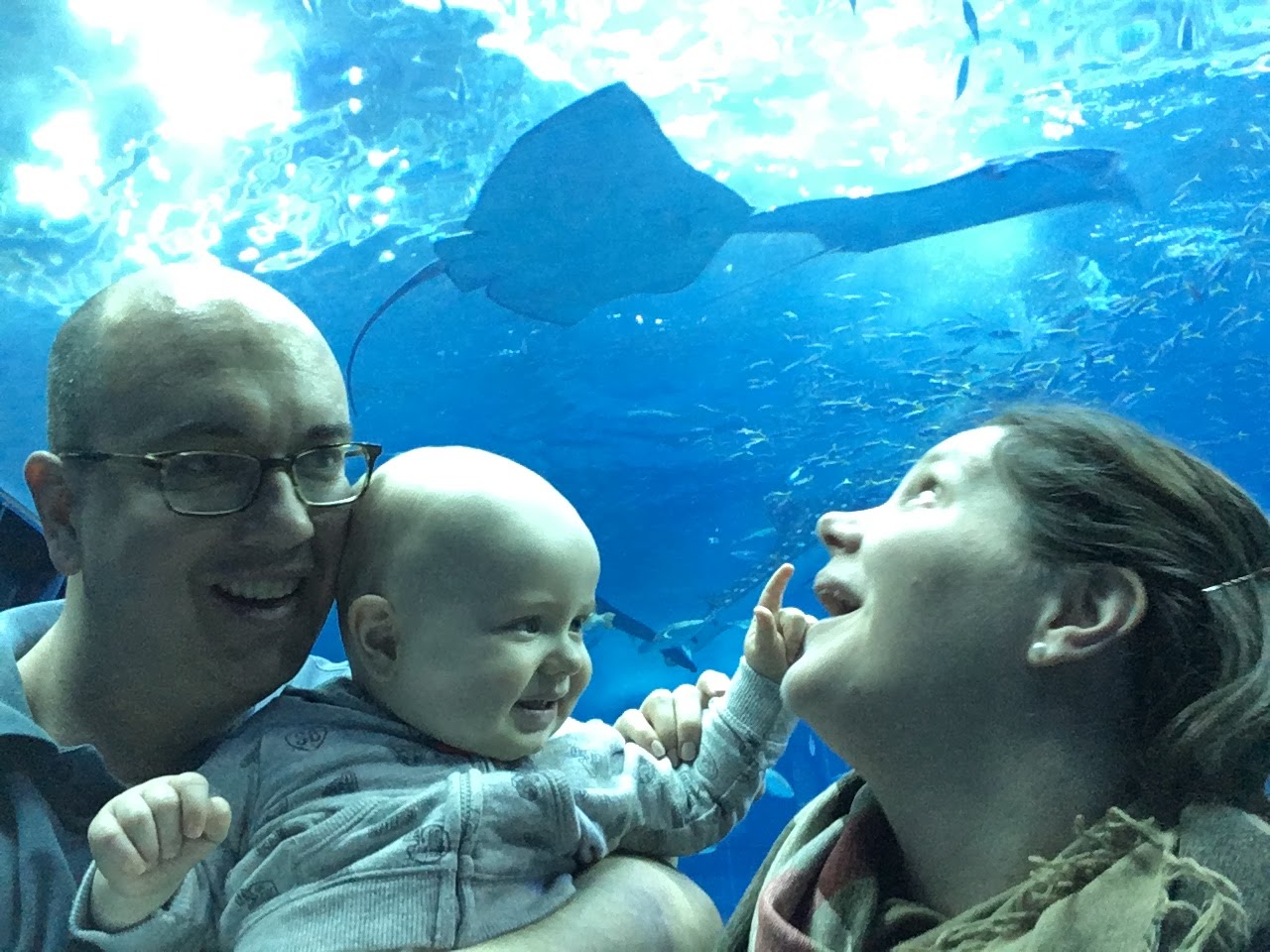 When researching family-friendly things to do we knew that the Okinawa Aquarium had to be on our list. Located on the northern tip of the island, the aquarium was a solid hour-long taxi ride from the resort so we hired a taxi for the day and the trip became our main event. The aquarium was pretty packed but thankfully we are pretty accustomed to being surrounded by people. The best part was that Charlie totally loved it and was enthralled by all the sea creatures, we enjoyed exploring all that it had to offer including a crazy little Ocean Blue Cafe that offered incredible aquarium views and Okinawa specialities like Taco Rice a surprisingly tasty influence from the American military. On our taxi ride back to the hotel, we made one of our “we have a baby in China” pit stops and stopped at a grocery to to stock up on big canisters of formula.

Since the ocean water & outdoor pool were both a little chilly we opted to spend some quality time at the indoor kids pool. It had a pretty good set up; a slide for the bigger kids, a nice open area for water play and a full lane for swimming. Charlie has been participating in Baby Swim “classes” since he was 4 months old, and he had an absolute blast in the water. The pool was well staffed and the kid floaty system was much better than our experience at the Sanya Yalong Bay Marriott -the floaties were free to use and we just had to put down a 100 yen deposit for each beach towel, which was returned to you when you returned your towel. All in all, it was a great addition to the resort and we had a blast playing in the indoor pool for a long time especially since we didn’t have to worry about sun exposure. 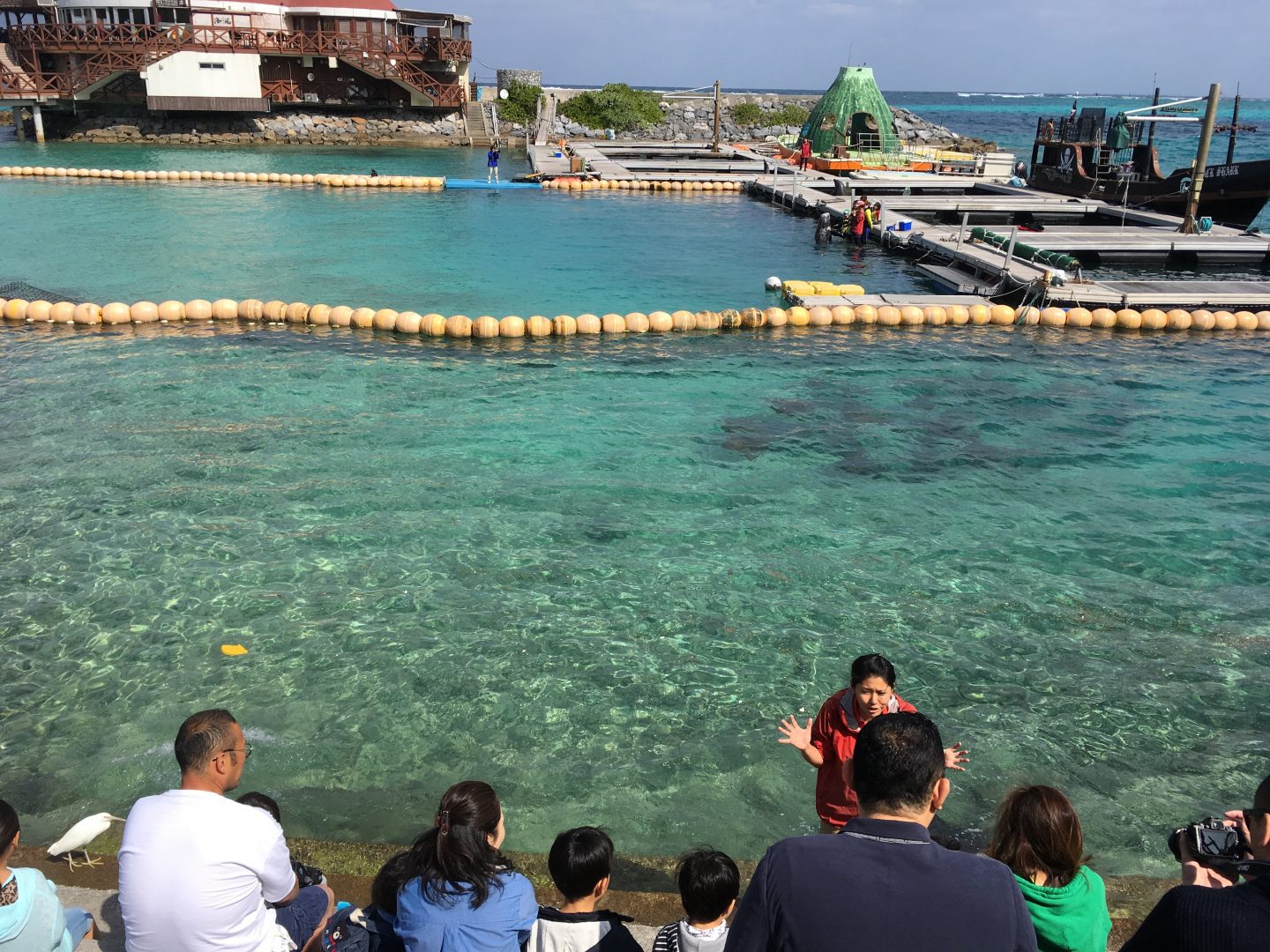 The Marriott had all kinds of kids and family adventures available as “add-ons”  it seemed like the expensive Dolphin Adventure was one of the more popular ones. While Japan is amazing about a lot of things, from our perspective they have a bit of an out-dated approach to sea life and while the Dolphin Adventure at the Marriott was in no way like The Cove, it was sad and a bit weird to see dolphins in such a small area in an American-owned resort. When we lived in Baltimore, we learned that the National Aquarium had taken the lead on a more modern approach to Dolphin captivity and care so it was a little disheartening to see the Okinawa Marriott have dolphins living in such a small space.

While we enjoyed our time in Okinawa, it’s not tops on our “we must return” list. It was nice for a weekend get-away but after exploring other direct flight or domestic options, I doubt we’ll be back. Also for a future trip to Japan we’d prioritize a trip to Honshu or Hokkaido over Okinawa – now we just need to find another Marriott with free laundry and detergent!

Lauren - March 15, 2019
0
Sri Lanka has been named one of the top new bucket list destinations and after a week exploring this beautiful and hospitable...