We could have missed a highlight of our Belgian vacation had a friend not invited us up to Mechelen for dinner.  Just north of Brussels, Mechelen is a beautiful and quaint little town that stole our hearts as we explored its small city center.

Mechelen is just 45 minutes north of Brussels by train and since we were staying on the southwest side of Brussels it took a little while to make our way up there. Luckily the public trams are super easy to use so we headed off with our Ergo Baby carrier and went to downtown Brussels. We had to walk a couple blocks from the Tram station to an older main train station where we could buy tickets for the next train to Mechelen, which was only 10-15 minutes later. Once we arrived in Mechelen we realized that Lauren’s broken French no longer worked and as everything was now all in Dutch. 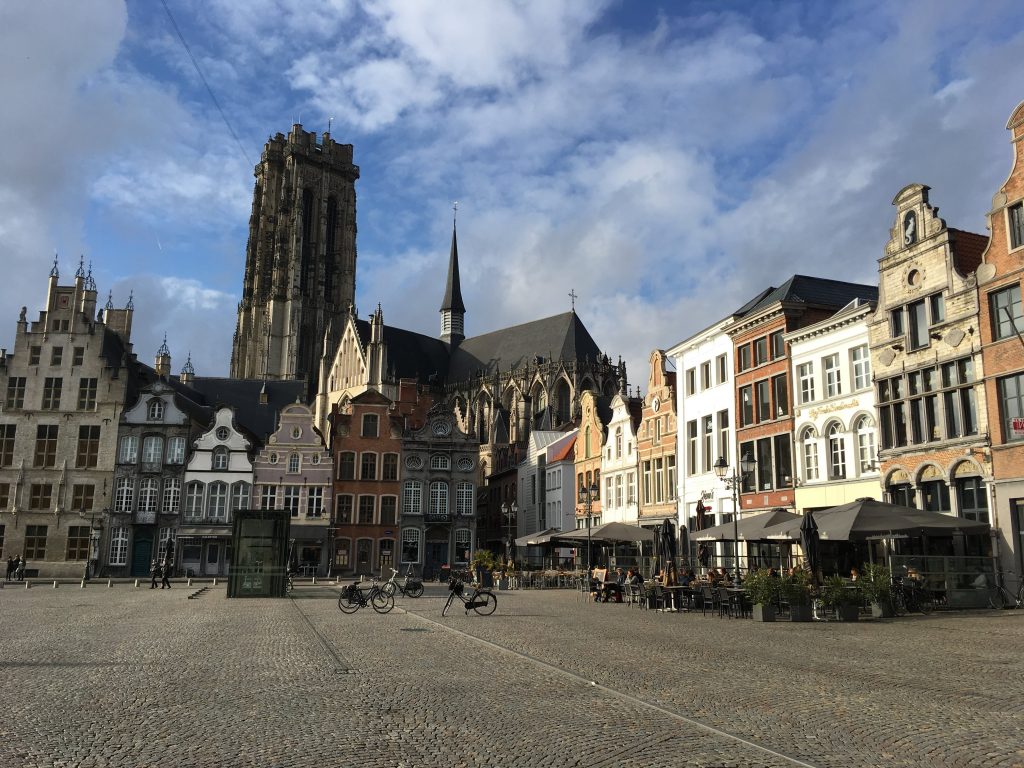 Without much of a plan, we just started exploring by foot – Mechelen has some amazing architecture and the walk from the train station to the main square was already a beautiful one.  We walked along shops, and churches and didn’t make it too far before planting ourselves at a cafe table in the Grote Market to enjoy a drink and light snacks. 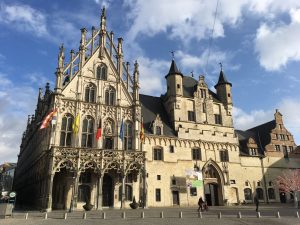 One of the greatest lessons of traveling with a baby has been that it forces us to slow down and be flexible. Yes, this means we do miss certain things that we would have done in a pre-kid life (I’m looking at you bell tower stairs!) but it also means we can sit at a table and take turns exploring the square with our little one, and just enjoy being present. 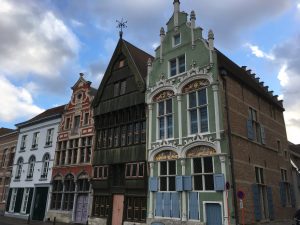 Fortified by caffeine, we decided to set out and continue to explore the city. We meandered down the streets to the Dyle River where we crossed bridges back and forth admiring the old architecture of the buildings on either side of the river. One thing we like to do in random towns is to spend some time exploring local supermarkets to see what things they have, particularly whether they have any of the old brands that we had previously worked on from J&J (Lauren) or P&G (me). After exploring the area by the river we made our way back towards the center and it almost felt like a ghost town as we were the only people on the street for quite some time and quite the contrast to Shanghai’s streets where there is hardly an hour day or night when you could be alone on a street. 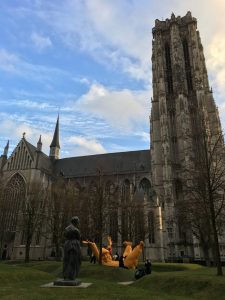 It was easy to navigate back to the center of town as St. Rumbold’s Cathedral had a bell tower that literally towered over the rest of the city and could reliably serve as a visual reference to make sure we were headed in the right direction. Once we found our way to the cathedral we went in to explore but found the huge sculpture garden to the side of the Cathedral much more fun as it had a massive yellow man’s torso sunken into the ground and his arms and legs stretching up towards the sky just inviting all the kids to climb as high as they could. It was so relaxing to hang out here and watch families picnic and play in the shadow of the cathedral. The juxtaposition of the modern sculpture next to the imposing cathedral really resonated with us. After hanging out for a while, we decided it was time to start making our way towards Mechelen’s famous Beguinages. 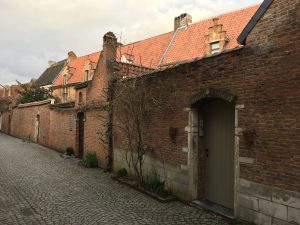 Beguinages is not an term that either Lauren or I had ever heard about prior to our trip to Mechelen, but we learned that Béguines were lay women who dedicated their lives to God but didn’t have to live in a convent. The Beguinages were historically little towns within towns that were established during the Crusades. What enthralled Lauren the most was that since many of the men who left for the Crusades did not return home, these areas became de facto self-sustaining female communities. Today Mechelen has 1 large (a UNESCO heritage site) and 1 small beguinage that are still inhabited (not just by women) and are full of lovely little homes and winding roads. 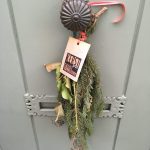 One thing that we found fascinating was all the small branches that were tied in bunches to the door handles of homes along many parts of the Beguinage. We never figured out what this was exactly but if you happen to know please leave a comment with the details! Once we got confirmation that my old colleague Geert and his wife Cecilia were on their way to meet us for dinner it was time to move on. What an incredible way to spend a couple hours exploring hidden streets, beautiful architecture and imaging all that has transpired over the past hundreds of years. 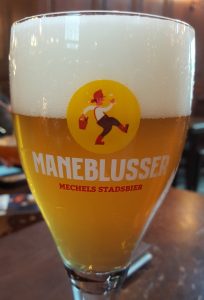 With roots going back to 1471, Het Anker is one of Belgium’s oldest breweries. It was then that Charles the Bold decided that “the beguines and officers” shouldn’t pay any excises and taxes on the beer brewed for the local “hospital”. They now have a hotel and restaurant where we enjoyed a delicious meal catching up with Geert and Cecilia while savoring a tasting flight of beers. Our favorite was the Manneblusser, which is a blond beer with a subtle citrus aroma and a smooth finish. The inspiration for this beer comes from story from the night of January 27th 1687 when the moon projected a reddish glow on Saint Rumbold’s tower, which was wrapped in a dense fog. Legend has it that a drunken man shouted “Fire, fire, the tower is on fire!” and the alarm was sounded with people of the town hurrying to extinguish the fire. Before they reached the tower, the moon broke through the fog and from that moment on the Mechelenians are called the Maneblussers or “Moonextinguishers”.

5 Things Not To Miss in Mechelen

1)  Drink a Manneblusser Beer:
2)  Walk through the Beguinages
3)  Sit and enjoy the square (& whoever you are with)
4)  Look up to appreciate the beautiful architecture
5)  Pop into a local shop (or two) – we successfully found a great candy shop just west of the Cathedral 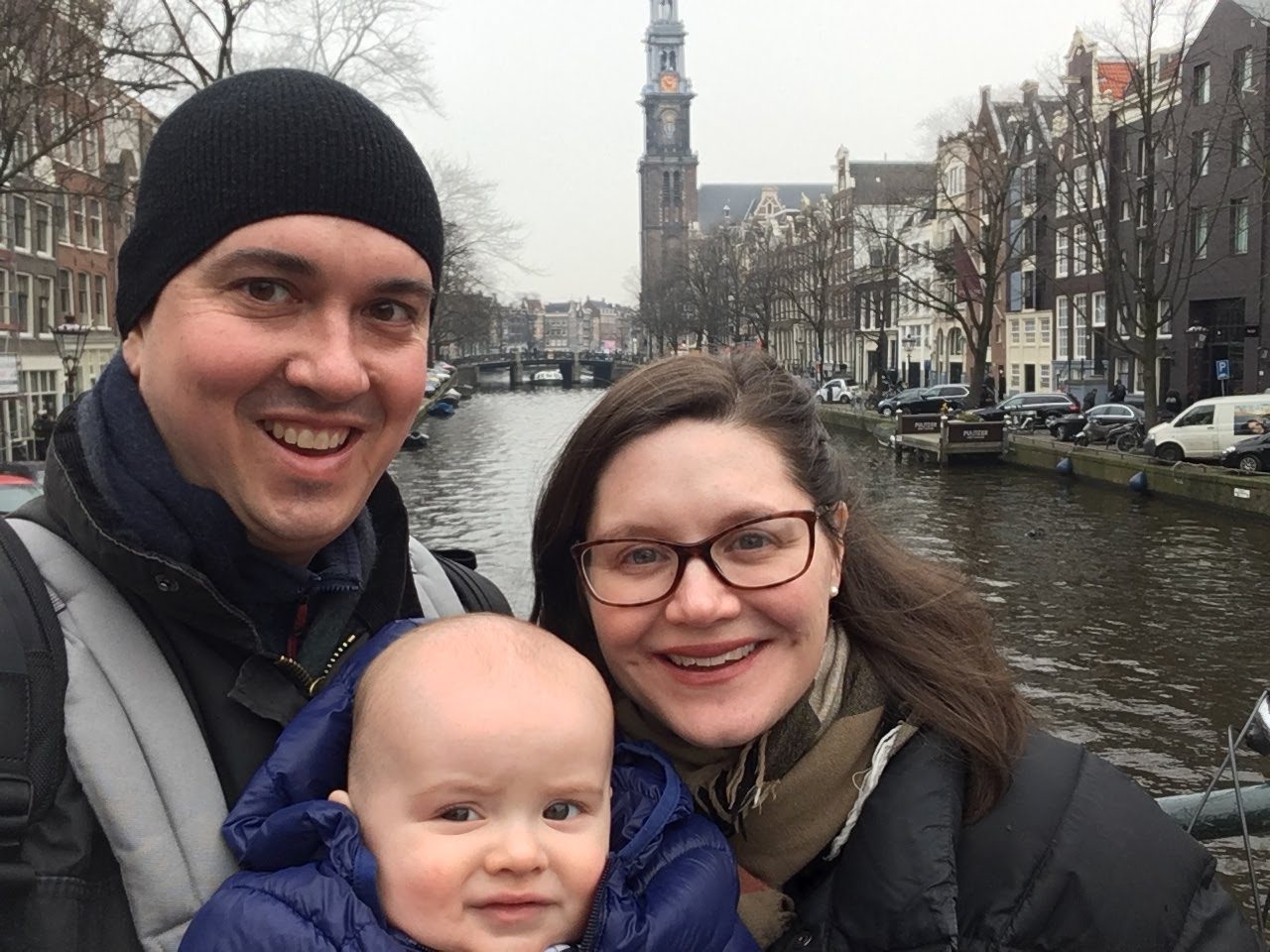 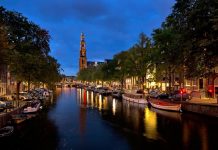 Sam - February 27, 2018
0
There could have been no better day trip imaginable out of Brussels than the one we took up to the city of Ghent! It...