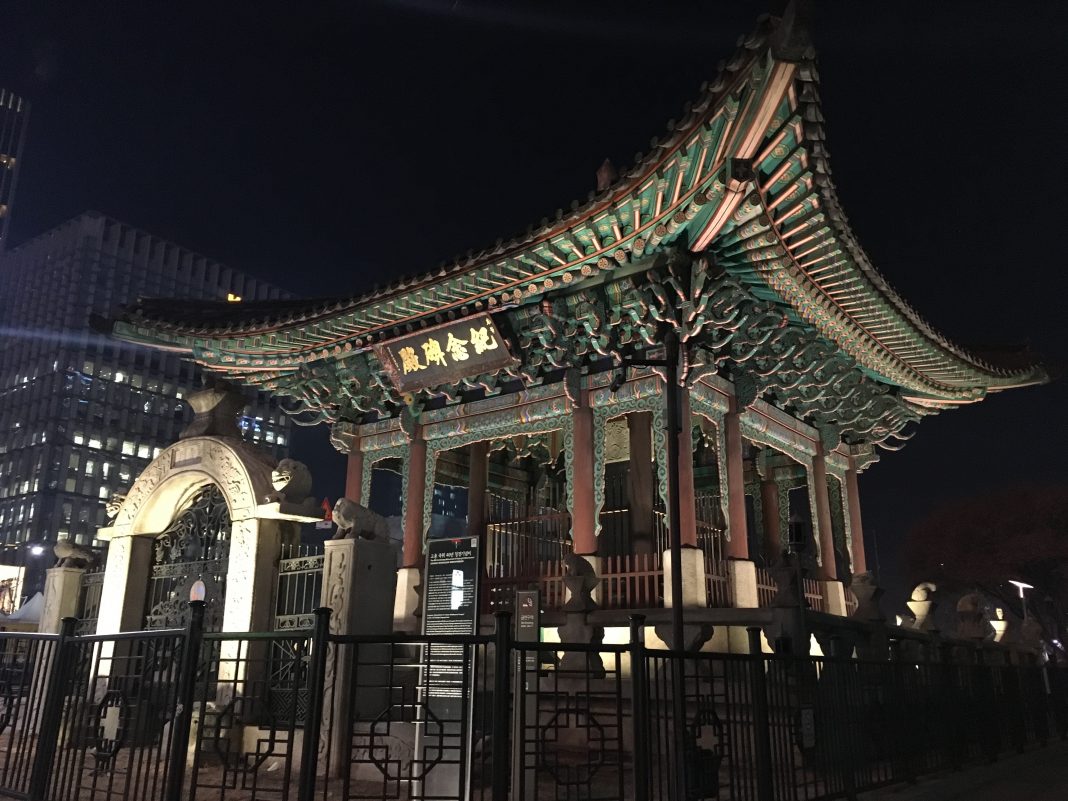 Looking for a Zika-free get-away at 24 weeks pregnant that was not too far from Shanghai, Seoul was the perfect destination. It offered history, culture, K-Beauty shopping, amazing cuisine, and time to catch up with old friends during the week-long Chinese New Year holiday. (Click here for our 2018 CNY Trip in Amsterdam, Brussels, Ghent and Mechelen) 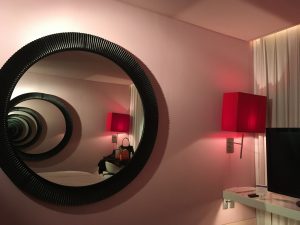 Seoul- as with most large Asian cities – has a solid public transportation system, so we opted to stay at a relatively Central location at the Seoul Autograph Collection hotel which is a Marriott property that wasn’t too far from a subway stop and an easy place to catch a cab if need be. The room was small but well appointed – even if the decor was a little strange, but it was totally sufficient and quiet despite being on a busy, protest-heavy street. The only downside was that to reach the fitness center you had to exit the hotel and in the January cold – despite our best intentions, we never made it to the fitness center. Thankfully, the hotel was easily connected to a series of underground walk ways that had some cafes and winded its way to one of the most famous shopping districts in the world. 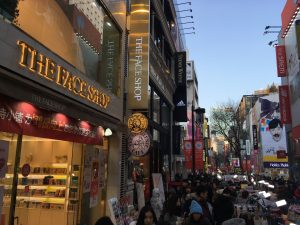 Myeongdong is a huge shopping area that includes ALL THINGS K-BEAUTY and whether you are a beauty enthusiast & know the full Korean skin care regimen or not, it is still an incredible cultural experience. We spent a fair amount of time exploring brands, & shops – some that we had hear of and some that were totally new to us. Being 24 week pregnant we took plenty of breaks in various cafes along the way, enjoying some fun green tea drinks and sweets. What make the area even more fun is that at night, it turns into a full-on street food market with all kinds of delicious and interesting foods. As I was pregnant and being a little food cautious, Sam was a little more into the street-food scene than I was. Overall, it is an area of town not to be missed! 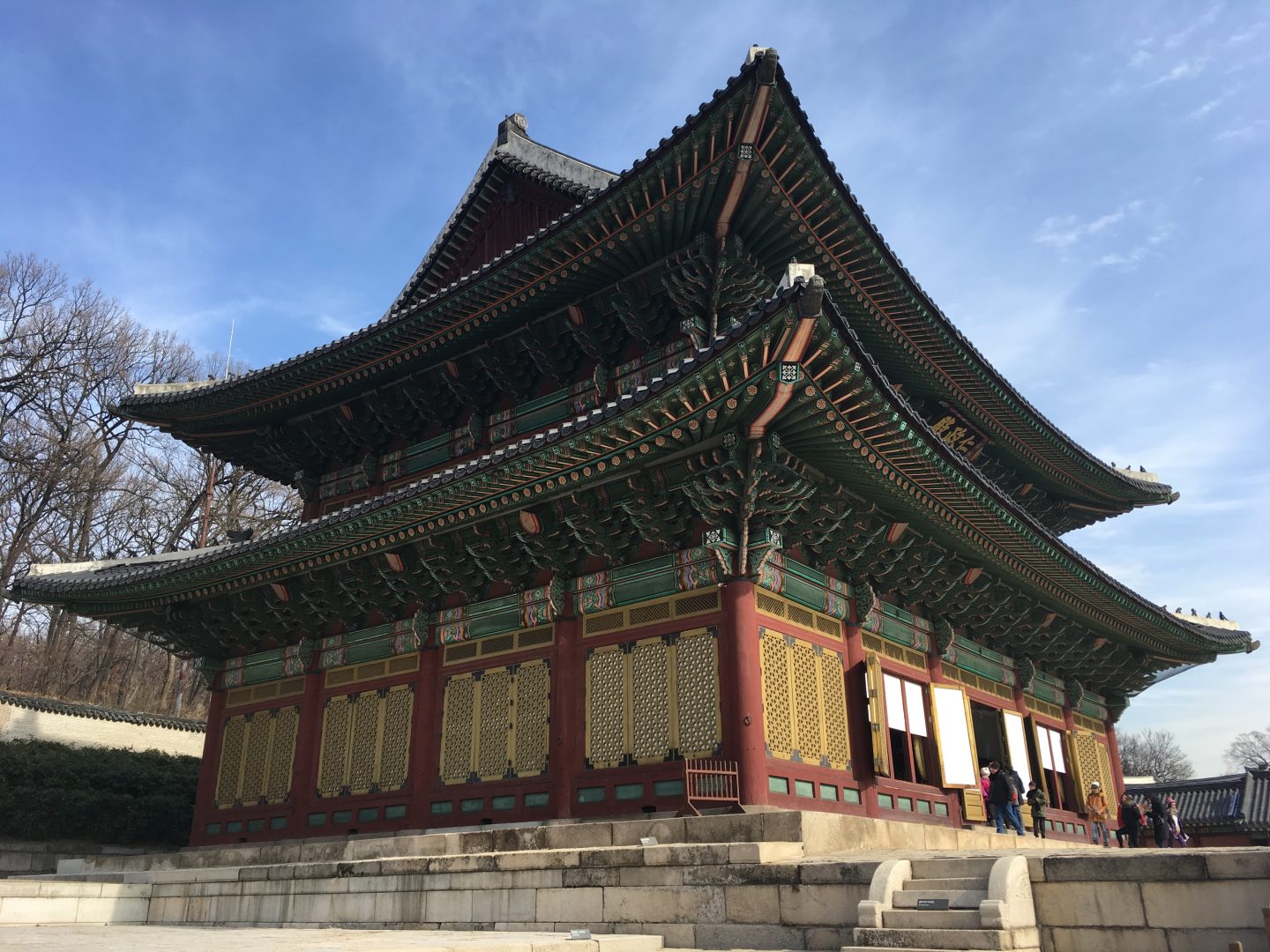 When we travel we try to do a good mix of history + cultural things without overdoing it. I have memories of a childhood family trip to Washington, DC where I think we hit every possible tourist destination over a course of just a few days and each family member had some kind of melt down along the way. So, I learned that travel lesson early and we definitely applied it on this trip to Seoul. On one of our first mornings we took a taxi down to a palace that is a UNESCO world heritage site to learn more about Korean history – all the invasions- and design. 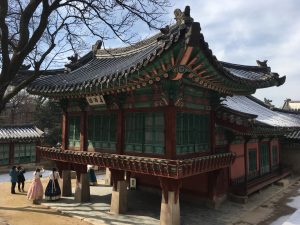 It was a chilly expedition but we enjoyed the fresh air and blue skies and learning more about a country that neither of us knew much about. One of the cool things we learned is that Korean citizen can enter historical site for free if they wear traditional attire, so it was fun to see lots of young men & women in beautiful Korean outfits exploring their own history. 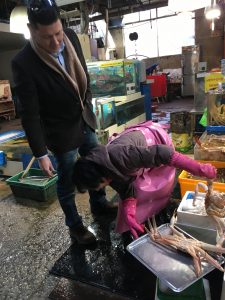 One of the added benefits of getting older is that we have many friends who have spread across the globe. Ryan-one of Sam’s friends from college- has lived in Seoul for about a decade and has made his mark on the evolving Korean food scene. For our first get-together, Ryan picked us up at our hotel and whisked us off to an amazing seafood market. We walked around the more traditional open-air market as well as the more “modern” indoor market. It was a mix of commercial and and individual selling and after looking at all kinds of different and delicious seafood, Ryan negotiated a fair price on a VERY large crab and then walked us around the corner to a cozy restaurant that cooks the seafood from the market in any way you want! 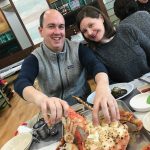 We had them cook up our crab as well as a few other goodies, but the best part was the crab fried rice served in the shell of the crab towards the end of the meal. Local, delicious and something we likely wouldn’t have done without a friend guiding us along the way.

Ryan continued to guide us through the culinary landscape  during our trip and and with him we tried some eel (which was alive when the cut it onto the grill) and then a full-on Korean BBQ meal. Aside from the eel, it was all pretty spectacular! 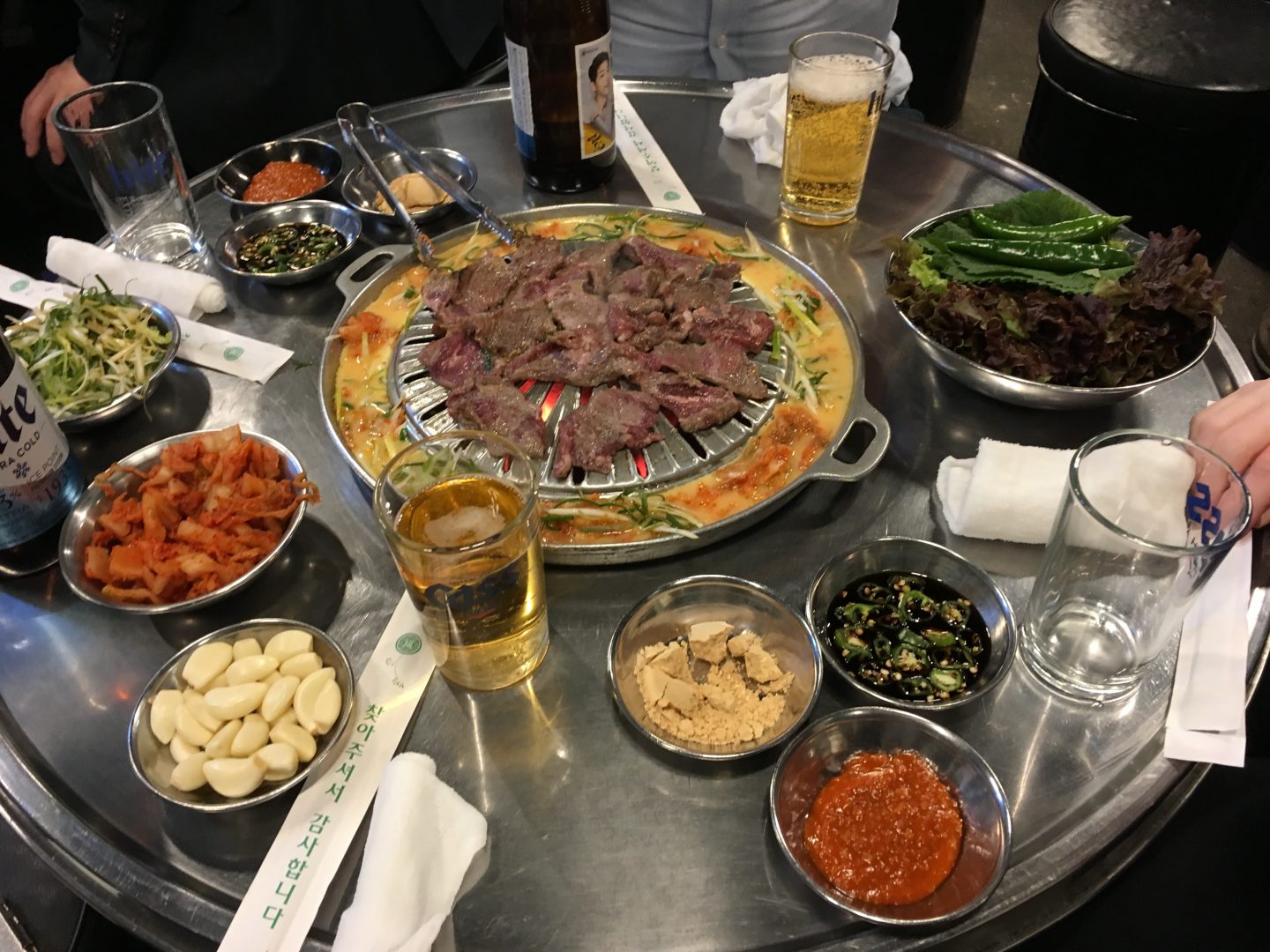 No visit to Seoul would be complete without a day trip to the DMZ & we found that the easiest & ONLY way to visit the DMZ was through a tour group. Luckily, there are PLENTY of tour options that all seemed similar in price. We just used Trip Advisor for a recco and booked our tour for a morning departure that had a meet up spot that was walkable from our hotel and a late-afternoon return.  While about an hour by bus,  from a military position –  the DMZ is surprisingly close to Seoul. Given our strong interest in Asia and our fascination with the Hermit Kingdom, I’d say that this was one of our favorite parts of our trip. 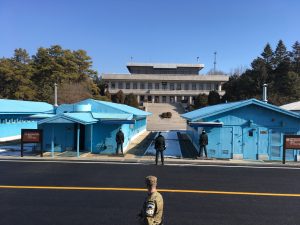 The US military acts as UN-sanctioned DMZ’s Joint Security Area and are pretty serious about security and passport controls, the US military guy assigned to our group was pretty friendly and shared the history and key moments of “Truce Village.” The DMZ visit & gift shop was by far the best part of the day which was followed by a mediocre lunch stop and mandatory gift store visit before heading back into Seoul. One of the more “interesting” parts of our bus ride is that we supposedly had a North Korean defector on our tour who was there to provide insights and thoughts on life in North Korea. We weren’t sure if it were real or not as most of her answer were quite generic, but I really did want to believe.

After touring a few historical sites + the DMZ, we were ready for some R&R. Sam had researched and found that there was a very large English book store. Living in Shanghai it’s a treat to have a large English book section, so we walked over to explore and picked up 2 books on Korean history, including one we have recommended to many family members and friends because it was so interesting as well as a few other murder mysteries for fun. After browsing for longer than anticipated and a tea break, we decided to make this pregnant lady very happy and had dinner at a very NON Korean place; we went to On the Border and it was awesome. Chips & Queso + fajitas made us both very happy and Sam really enjoyed his margarita….while I enjoyed my sparkling water.

For some reason (I blame the song) I really wanted to explore the upscale Gangnam neighborhood, so Sam indulged me and we taxied over to this section of town to explore, but it was lots of shops that we had also seen in Meyondong and nothing terribly exciting so we called it early and went back to the hotel for me to rest and read our new books. 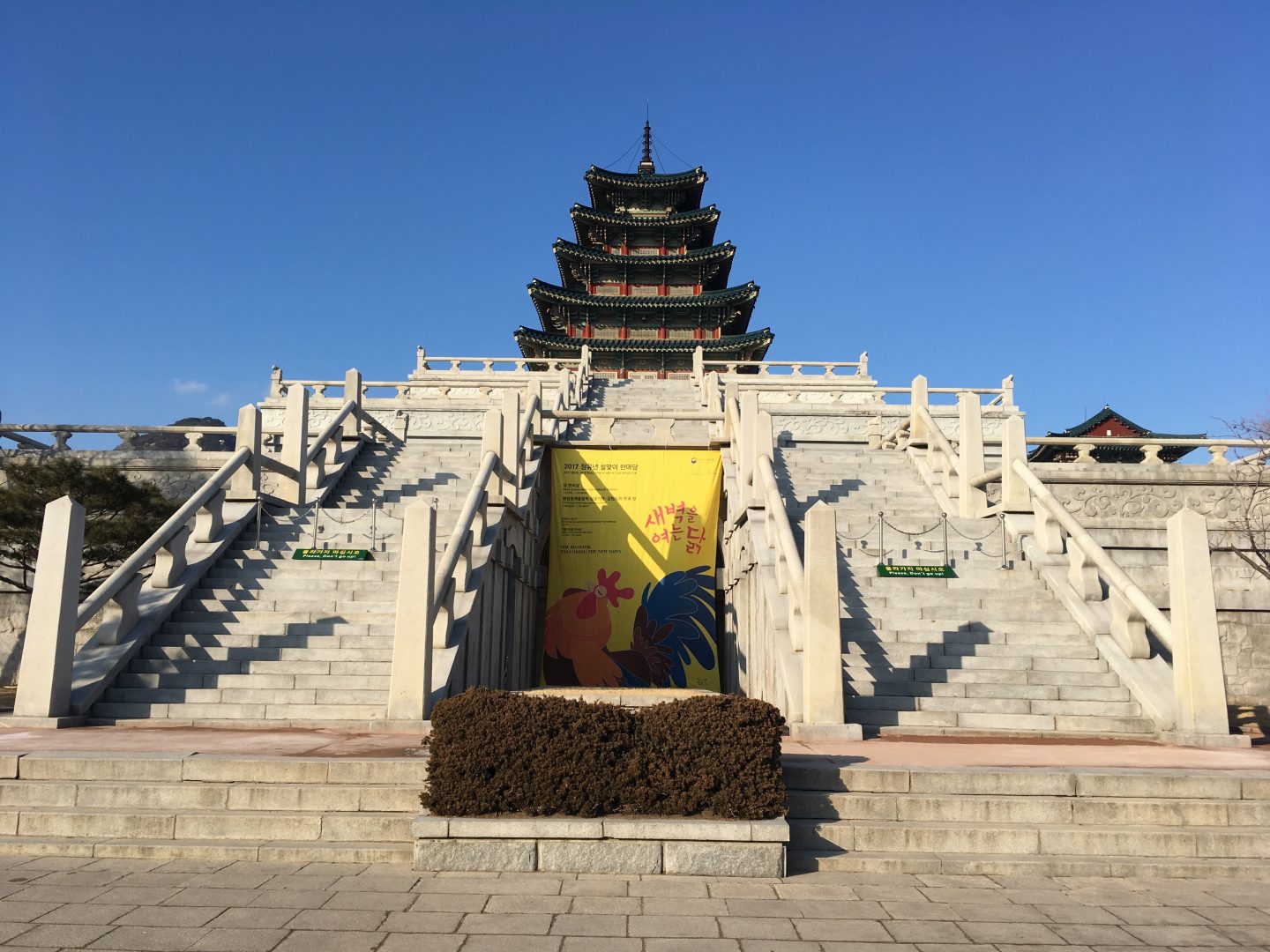 We wanted to hit up a few more touristy spots and tops on our list was the huge Palace and museum, it was gorgeous and did not disappoint. After a morning at the place we spent the afternoon exploring the Bukchon Hanok area – full of winding streets with traditional architecture, restaurants, cafes, and shops it was a true delight to explore this nook of the city where old and new all seemed to flow together. 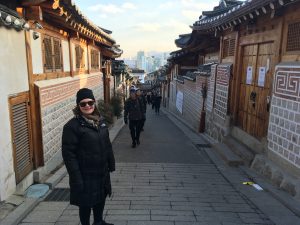 It is still very much a real neighborhood and there were lots of signs asking for tourists to respect the neighborhood and to keep noise at a minimum – not all tourists heeded these requests which was a bit frustrating but we hope that this area continues to welcome guests as it was a interesting look into a beautiful neighborhood.

After a few days in Seoul, Ryan asked if we’d like to escape the city and suggested little mountain get-away to a national park just outside of town. So we loaded up and went on an adventure; it was SO nice to get outside of the city and see some beautiful mountains. The trails were mostly paved so it made for easy going and we just slowly walked for a few hours before coming back down for a long tea break. 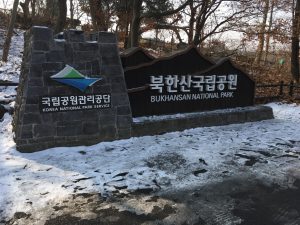 On the way back into town we stopped for a traditional lunch with tons of banchan which were interesting and delicious. I am a huge kimchee lover, and the sweet owner made sure this pregnant lady got all the kimchee she wanted! We were so thankful that Ryan was able to make a weekday outing happen and it was a truly special day.

If we hadn’t been looking for Zika-free destinations I doubt we would have spent a full week in Seoul. What surprised us though was how much we enjoyed the city and our little vacation. It was the perfect mix of history, culture, time with friends and Mexican food. The only regret I had was that I couldn’t visit a true Korean bathhouse due to my pregnancy because they are pretty warm – which just means we’ll need to plan another visit! 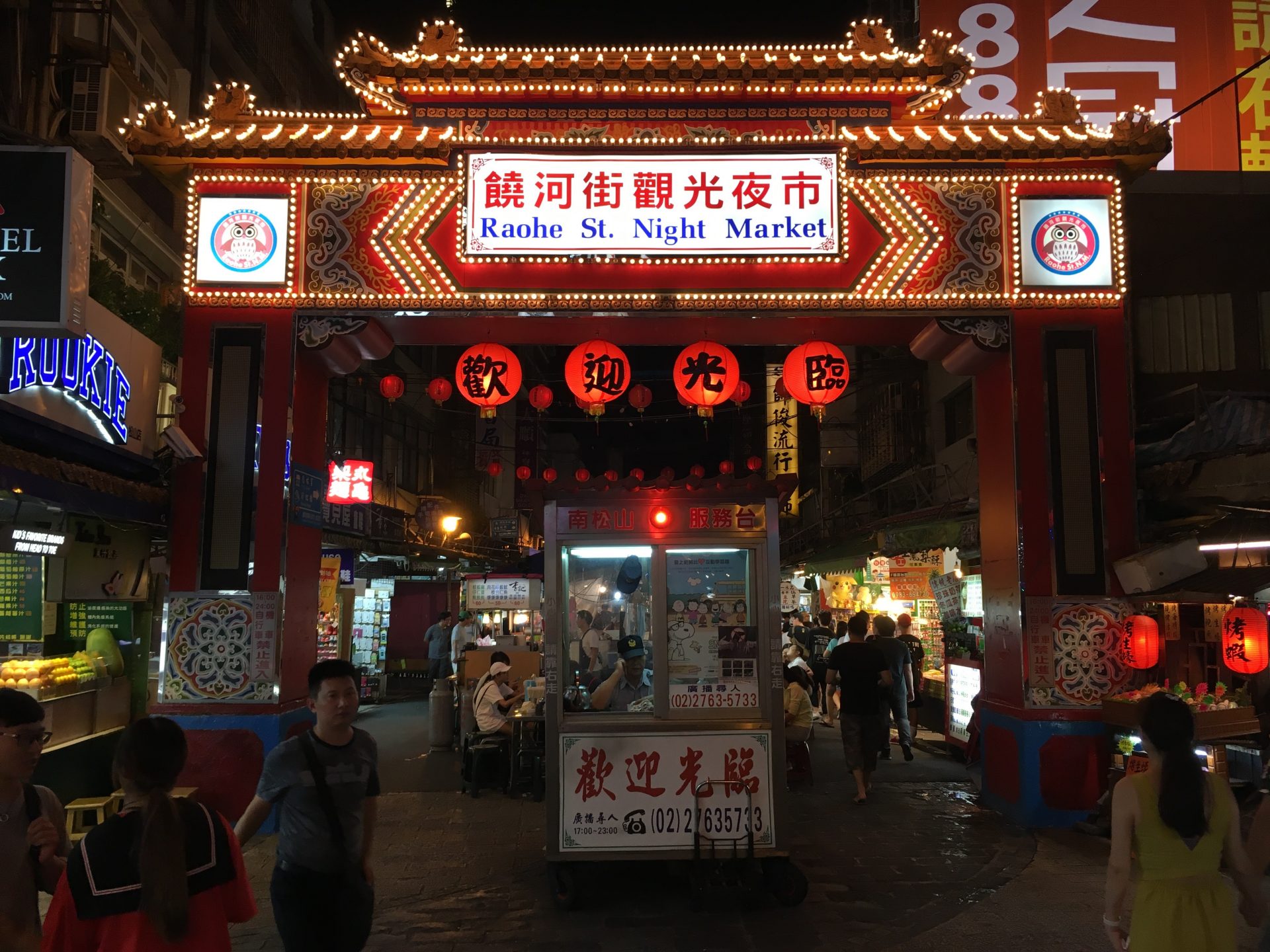 Sam - September 3, 2017
0
Since we can't get all the vaccines we need in Shanghai, we occasionally have to try and fit in a visit to a pediatrician...