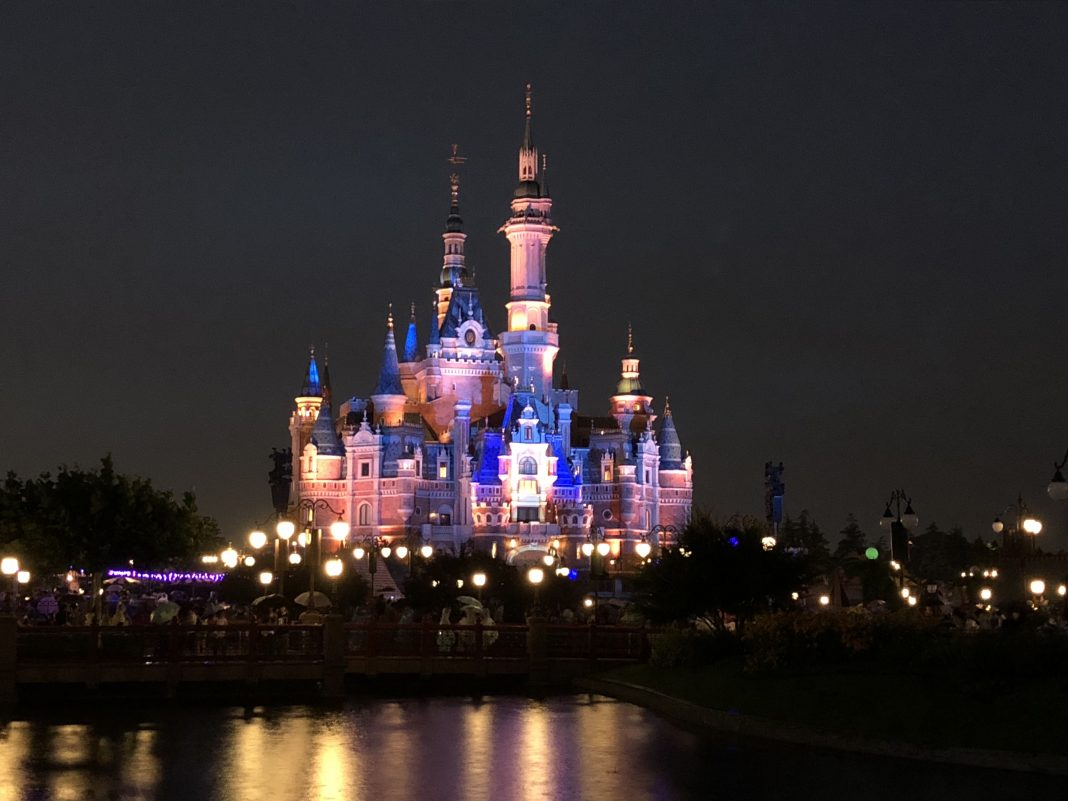 We couldn’t think of a better way to celebrate our little Charlie’s first birthday than with an all-day excursion to the Shanghai Disneyland to make his special day as magical as it could be! Not only did he have a great time, but Mom seemed to have an even better time! 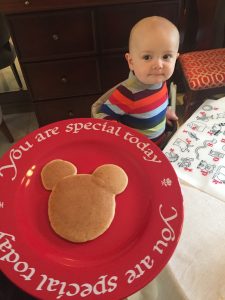 While Charlie & I slept in, Dad got to work early in the morning getting the table set and starting breakfast. Pancakes (Kodiak Cakes) are always a special treat (especially when Grammy hand-carries them from the US) and Mickey-shaped pancakes are a “birthday special” treat and a fun way to kick off the Disney birthday extravaganza. It was also the perfect time to bust out the “You are special today” plate – it was a wedding gift from my sister’s mother-in-law who shared that she loved this plate for birthdays, first days of school, and just for days when your loved ones need to be reminded that they are special. Now, Charlie is special to us every day, but a birthday Mickey pancake was a great reason to bring out this plate

Given the China-US time difference we had scheduled birthday calls with the family for Charlie’s birthday morning and we were able to have a few FaceTime renditions of “Happy Birthday” before it got to be too late back home. After phone calls it was time to open the cards and presents that had been shipped ahead of time. Auntie sent a super cute outfit, Grammy had hand-delivered a wooden dachshund, and Great Auntie had sent a really cool opposites book. We were trying to not go overboard with gifts, but during our Christmas trip we had picked up two toys that we knew would be perfect birthday gifts- the first one was a Hape Shake and Match wooden toy sorter which he immediately loved and the other was a magnetic wood block set that we had seen our niece play with and love – he didn’t quite get the magnetic aspect yet, but he seemed to have fun with it and will give him some good learning toys that he can “grow into” It was a fun morning of connecting with family and kicking off the celebration with some fun toys and books. 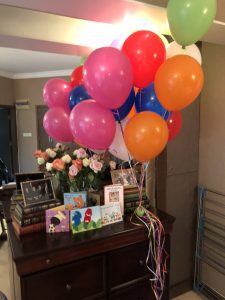 Charlie is only going to turn 1 once, so there were a few little things that I wanted to be sure to do. As more of the Rooster babies turn 1, lots of moms are posting different party suppliers and a few months ago a parent had posted about balloon delivery that wasn’t too expensive. Charlie has always been very interested in balloons, so I thought it would be a fun way to add some color and fun to the celebration. The day before his birthday, I placed the order for 12 balloons (one for each month!) and asked for 2 of each various bright colors. They arrived around 11 AM (& they gave us 2 extra “free” balloons) and were an immediate hit with Charlie!  Parenting win!

After the pancakes, presents and balloons, it was time to depart for our Shanghai Disneyland adventure. Thankfully we live about a 10-15 minute walk from the nearest subway station and our “home” station includes Line 11 which goes all the way out to Disney. We knew it would be about an hour subway ride, but it was easier, faster & cheaper than calling a Didi (the Chinese Uber) – it also meant that we didn’t have to keep him in a car-seat all day and could give him more room in his stroller. While not super quick, it was relatively easy and Charlie was a sport for the first 45 minutes of the trip and the last 15 minutes were made OK with a combination of hide and seek and Puffs. 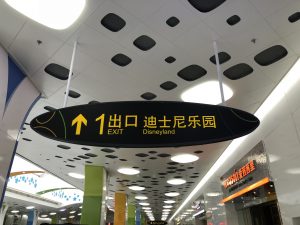 As we exited the station, all of the directions were super clear and we just followed the hordes of tourists on the way to the entrance gate. Sam had done the legwork of the tickets and had dowloaded the Shanghai Disneyland app to help us navigate the day.  We tried to download the Fast Pass but they were all gone for the day – which was a major bummer. (See my post on how to avoid this issue.)  So despite being Fast Pass-less, we thought we were all set and just as we made it through the entrance, it began to RAIN – heavily…so our first purchase of the day was 2 overpriced but very cute Mickey umbrellas. The weather forecast did mention rain, but I’m not sure if we just forgot or were full of birthday optimism but I don’t think we thought it would rain for most of the day – but it did – and we survived. 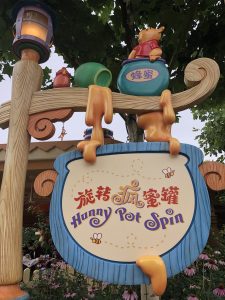 With the downpour we decided to grab some lunch and fuel up for our afternoon; Sam got a chicken, green bean, potato platter and I got a sausage, green bean, potato platter and a fruit cup for the family to share. The food was fine and the potatoes were Mickey shaped so that made me happy. Fortified, we set off to explore. We had looked in the map and decided on a few baby-friendly rides but wanted to walk around a bit first. Our walk took us to the Alice in Wonderland garden which was way more interesting and fun than I had anticipated, we followed that up with a ride in the Winny the Pooh Hunny Pot, watched the super short parade, explored through Adventureland (which was HUGE), had a winding walk through the Castle and then went on the Flying Dumbo ride, which I think we enjoyed way more than Charlie. 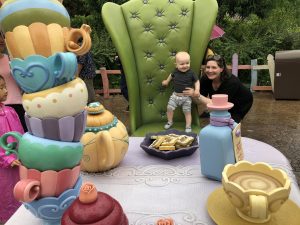 We walked and walked and I began to realized that Shanghai Disneyland was much larger than I had imagined, but it was just as crowded as I had imagined, and many of the waiting times were way too long to either leave one parent with a stroller or just too long for a baby and parent to wait in line. Wait times of 75 minutes, 120 minutes and 150 minutes were common, and in my book there is not a single ride that justifies that amount of time in line. We had identified three rides we wanted to try and the only one we couldn’t make work was the carousel, which made me a little sad, but not sad enough to wait in line for 60 minutes. If we go back again, we will have to figure out a way to make the Fast Pass happen. 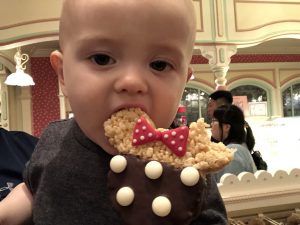 After a long afternoon we decided to take a break and grab a light dinner and a few treats. This week has been the first week that Charlie has had real sugar and we all shared a Rice Krispy treat that was yummy and a super sweet – birthday treat!  Despite some tired feet, we decided we wanted to stay for the fireworks as we had heard that there were amazing and they were pretty good, but they were blocked by lots of umbrellas. We held strong throughout the rainy fireworks because we wanted to try to get on the carousel before departing but alas they closed that ride early that night and did not re-open it after the fireworks which was confusing and a little disappointing. It was a super long day, and the most fun part was doing the adventure together; Charlie enjoyed seeing all the new sites and people and we avoided most of the rain by opting for meal or diaper-changing breaks when the rain picked up. So while maybe not the best weather day for our first Shanghai Disneyland adventure, it was a perfect adventure for our little family. 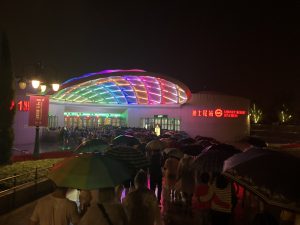 Rén shān Rén hǎi is a Chinese idiom that literally translates as People Mountains People Sea – essentially a ton of people. That was the post fireworks departure. We thought that we could hit up the Carousel but since that was a bust we joined the waves of people making their way back to the Subway station. It was relatively orderly but it was also just a ton of tired Shanghai Disneyland tourists who were wet from the rain and ready to get home so there was some pushing that went on. Now this is an aspect of Chinese crowd experiences that I do not enjoy but that I am learning how to navigate and thus tolerate. This was when I was thankful for our bigger stroller as it acted as a natural barrier and with me on one side and Sam on the other, we could ensure that Charlie was protected and didn’t get too freaked out by the crowds. The subway station only had one main entrance (with security) open so it created a bit of a bottleneck; Charlies was mostly OK but got a little upset and I was able to calm him down.  After making through the entrance we caught the next subway car headed home and got situated. Since it was crowded, we had to stand the whole way home but Charlie fell asleep and seemed like a happy, tired camper.  All in all it was a lot of time on our feet and lots of steps – our apps showed that we walked over 19,000 steps – which is a crazy number of steps, but we made the most of the day with our boy was totally worth it. 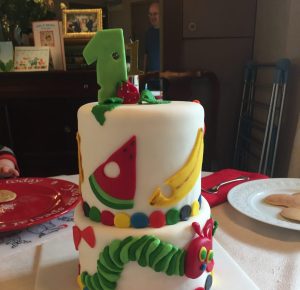 Since we got home late, we decided it would be best to push the cake to the next day. No first birthday is complete with cake but this meant that the birthday celebration could continue another day! I had every intention of making a homemade from-scratch birthday cake like my mom made every year, but my week was full of late meetings so it meant that this wasn’t in the cards this year, instead I leveraged my mom skills and outsourced it. I had found a brilliant cake decorator who took my vision (aka pinterest images) for a Very Hungry Catepillar themed cake and made it into a reality. We’ve read Charlie this book since he was born and it seemed like a super cute and colorful way to celebrate. The cake was beautiful and delicious, and everyone seemed to enjoy it – so a total win in my book.